Have you ever had a love hate relationship with a book. You were wondering if the book would get better so you keep reading . This is what happened to me while I was reading this book. THE UNATTACTIVE VAMPIRE by Jim McDoniel 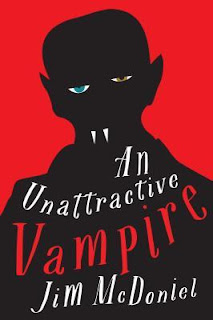 Thought vampires were dead? Well of course they are, but Jim McDoniel proves that don't have to be boring. Or sparkly." Veronica Belmont and Tom Merritt, "Sword & Laser"
Jim McDoniel s debut novel, "An Unattractive Vampire," is a darkly comic urban fantasy of ancient horrors in suburban cities. After three centuries trapped underground, thousand-year-old Yulric Bile also known as the Cursed One, the Devil s Apprentice, He Who Worships the Slumbering Horrors awakens only to find that no one believes he is a vampire. Apparently he s just too ugly modern vampires, he soon discovers, are pretty, weak, and, most disturbing of all, good. Determined to reestablish his bloodstained reign, Yulric sets out to correct this disgusting turn of events or, at the very least, murder the person responsible. With the help of pert vampire-wannabe Amanda; Simon, the eight-year-old reincarnation of his greatest foe; and a cadre of ancient and ugly horrors, Yulric prepares to battle the glamorous undead. But who will win the right to determine, once and for all, what it truly means to be a vampire?
MY REVIEW
I started reading this book and had a really hard time with it at the beginning . I had a really hard time getting into the story . I am a lover of all things vampire , preferably not shining vampires more like Dracula type. Yulric was a different character all together . Not attractive at all with a stake in his chest. The story is Yulric is uncovered by a strange boy and his sister . He tries to understand about the ways of the new world . Will he survive his arch enemy and will he find his way in the new world
The characters in the book were ok , I mean they all had promise but I feel that they fell just a little flat . I think they could of done a lot more with the characters . They could of been a little bit more complex and funnier . They do get a little better as you read into the book . Thank god they don't sparkle though, Which is brought up a lot in the book.
There are some areas where you will laugh and chuckle as the characters fumble their way through the events . The satire is dark and there are some things that will make you go hmmmm .  I felt that it was just not up to par with the other vampire novels out there, The prologue writing didn't really match the rest of the story and the puritan jokes were flying all over the place and they got old really fast .
Overall I did like the book and it was a good read if you like reading about vampires before sparkled and love quirky characters that just want to kill each other . This could be the book for you