I have fallen in love this author and have read everything she has written. I especially love her Kincaid Wolf Pack books.  I devoured Jessica Lee's newest book in a matter of hours , So let me introduce you to the boys of SINS OF A WOLF  by Jessica Lee 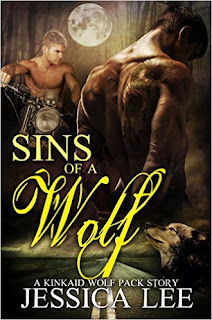 The heat building between them is ready to erupt, threatening to shatter the wall around a soldier’s heart.

Former Green Beret, Zackary “Sin” Sinclair has a secret nipping at his heels. And he’ll do anything—go anywhere—to keep that info locked down tight. Including playing along with the news that he’s the father of his best friend’s little sister’s baby. But there’s no way in hell that’s possible since he hasn’t touched a woman in years. That, and his best friend has no idea Sin’s been hiding the fact he’s gay since they were teenagers.
KinKaid Wolf Pack Enforcer, Aydin Michaels is his cousin’s new pet project. If he doesn’t sober up and fall in line, he’ll be kissing his new career goodbye, and more than likely, packing up to head back east. The last thing he needs is a smokin’ hot human male with eyes that turn him inside out trying to play his hero.
When a bar fight goes wrong and Sin ends up bitten, Aydin is charged with tracking him down—before he shifts—and educating him about those in the world who aren’t quite human. Rule number one: in order to survive, shifters stick together. But convincing the hardheaded soldier on the run to stay put, preferably with him, is easier said than done. For Sin, putting down roots means paying a price. He either betrays a friend and risks losing the only family he’s ever known, or walk away from the man who’s claimed a piece of his soul.

MY REVIEW
I forgot how much I loved the boy of the Kincaid pack, until I started reading Sins of a Wolf . Jessica took me right back to the pack. The action starts on the very first page and continues through out the whole book .  We meet Aydin a sexy shifter, who has a little bit of a problem with an attitude and fighting. When Zack, Sin, Sinclair interferes and gets bitten by Aydin.  Now they are destined to be together . Aydin is told to track down Sin and make sure he gets through the first shift. But there is more to them then meets the eye , there is a strong attraction and undeniable sexual chemistry between the two men. Will they realize that they are meant to be together and will they survive the first shift .
Jessica writes some pretty complex characters and Aydin and Sin are no exception. Zachary Sin Sinclair is a former green beret who is trying to come to terms with what is happening in his life . He is gay but hasn't told anyone yet . You see him struggling at the beginning of the book and when you read him , you want to hold him and make his life a lot easier . As you read you see him grow and become the man that is comfortable in his skin and what he is , both gay and a shifter .  He comes around and realizes that coming clean is the best thing that could ever happen , Aydin is the hot sexy shifter that has a problem with authority and is always getting into trouble . He wants to find love but he has issues that he needs to work out . He thinks that love is unattainable and he doesn't deserve love . As you read you see them grow and finally realize that home is where they both are .
Jessica is my go to read if I want to read something sweet and sexy. She takes us on such a ride The characters are always well developed and complex . You want to just hug them and keep them safe .
So if you want a good afternoon read that will  melt your kindle and make you want to cool off afterwards this is the series for you . So check out the boys of the Kincaid pack