I have been a long time X FILES fan and was so excited when I found out that they were in graphic novel form . So when I had the chance to review one , I jumped at the chance . X Files Season 11 volume 1 by Joe Harris . 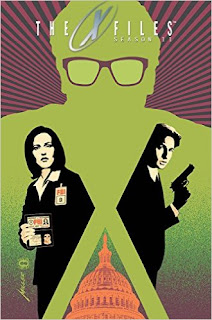 For years, FBI agents Fox Mulder and Dana Scully toiled in the X-Files Unit, a one-office division of the Bureau dealing with cases deemed unsolvable and related to unexplained phenomena. Eventually, both agents left the FBI and began a new life together in peaceful anonymity. However, recent events prompted them to return to the Bureau and the X-Files.

Since then, Mulder has seen his work with the FBI discredited and has found himself a fugitive from the U.S. government―all thanks to the mechanizations of a former ally, Gibson Praise, who now wields powers far beyond even what Mulder can imagine. Meanwhile, Scully remains at the FBI under the watchful eye of Gibson, as she works to prevent the government from falling further into his clutches and to clear her partner’s name.

MY REVIEW
I was so excited when I saw this volume up for grabs , so of course I grabbed it . Some of the old characters are back and wreaking havoc all over the place . Scully is trying to keep the government falling into the clutches of an evil man . As she works to clear Mulders name.
This book falls back to the old ways of the X Files the characters are well written and complex . The illustrations are good and easy to follow. The plot was ok and sometimes you got confused but that is THE X FILES  way of doing things .  We see Mulder and Scully fight all kinds in this series and I so can't wait for the next volume out there . So for all X FILES fans out there check  the characters are awesome and the graphics are great , not too dark . They are an easy read that will keep you entertained. Check them out if you are a x files fan . You won't be disappointed
Posted by BOOKS TO CURL UP WITH at 7:38 AM