WELCOME TO DAY ONE OF OUR VALENTINE'S WEEK MASSASCRE 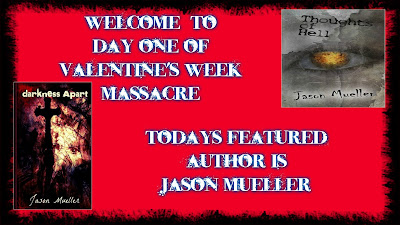 Thank you for meeting me today .
Jason , Glad to be here today
Ok here we go are you ready
Jason : Sure let's do this
Ok question one


Tell us all a little bit about yourself.

I’m a dazzling young Gemini. I like needle point, macaroni ducks and basements!

My closest friends call me Jake.

I escaped from Illinois when I was 19 or so and haven’t looked back. I lived in Montana for 10 years, Michigan twice, in Indiana twice, and that’s where I’m at now.
I studied for the ministry for several years before life took a giant turn. It forced me to change things up a bit. I’ve read the Bible, both Old and New Testaments more times than you would believe; especially considering it’s me we’re talking about. To this day, much of my work has a religious backdrop to it even if you can’t see it.
What inspired you to write your first novel?

I ummm……. You have to be inspired? Honestly there isn’t any big emotional inspiration. I woke up at a cross roads in my life where everything I’d known was slipping away. Everything I had worked towards was gone. I needed something to do, to be. I’d always known I would write. It was just time to do it.
Do you have a specific writing style?
I just write…