Good Thursday all , I hope this day finds all well and reading up a storm . Today I am going to review SPELLBOUND IN SLEEPYHOLLOW. A VON TASSEL SISTERS ANTHOLOGY by three great authors Patricia Elmer, Rosalie Lario and Boone Brux 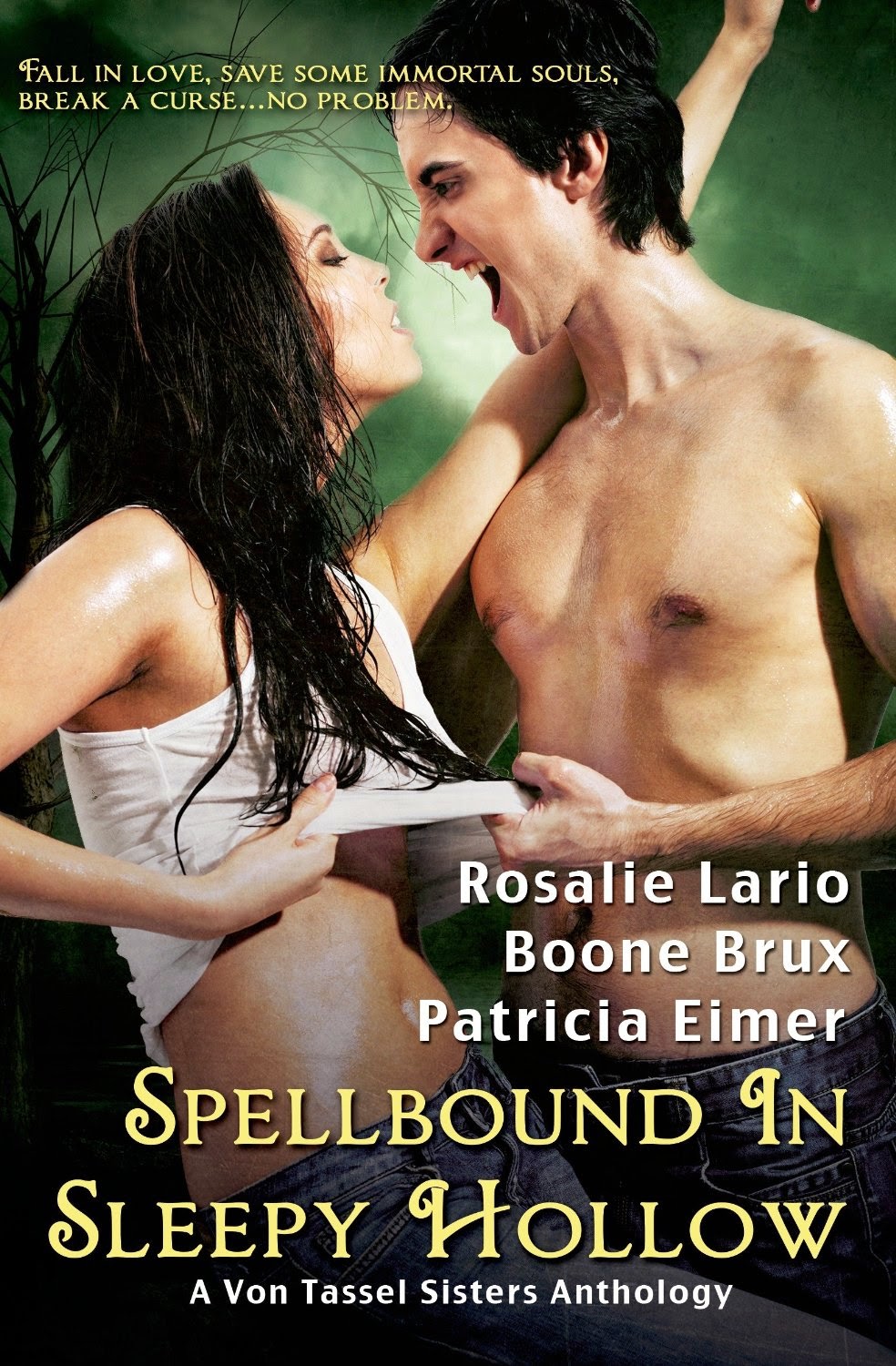 The Von Tassel sisters are in deep.  With a new inn opening up to non-magic guests, these three witches have enough to worry about, but after a deal with the Headless Horseman, all three Von Tassel sisters must find their true loves by All Hallow's Eve or forever be trapped as ghosts in Sleepy Hollow like their ill-fated aunties
Will Stephanie be able to forgive her playboy ex? Will Bri be able to win back her childhood crush-turned-ghost hunter? Will Lexi be able to sway her supernatural employee? And will they all be able to fall in love by the week's end?
MY REVIEW
This was a set on my TBR LIST ever since it was released. This anthology is a great twist on the HEADLESS HORSEMAN and revolves around three sisters and there aunties who are 250 year old auntie , who are ghosts haunting the inn. There are three books in the series with each sister and auntie involved .
The first book BEWITCHING HER ENEMY by Patricia Elmer. This is Stephanie and Katarina's story.  Katirana was the first of the Von Tassel witches to summon the headless horseman to help her and was cursed to walk the grounds of the inn. Stephanie in a time of panic does the same thing to help with getting rid of her witchy bitchy boss. Which in turn curses all three sisters to find their true loves by Hallow's Eve or be cursed just like the aunties. Stephanie and Katarina 's situations are so similar that the men they loved have cheated on them. So they thought, as the story goes on they are thrown together and situations are resolved , This was a great way to start the anthology, you laugh and you will want to slap a few people upside the head,,

BOOK TWO: UNDER HIS SPELL by Rosalie Lario
This installment is Brianne and Elizabeth's story, Bri has had a crush on Jason since she was a teenager but it went bad fast, and she put it behind her, she knew that it wouldn't work out cause she was a witch and he was a dud (a non magical person) until the day he showed back up and all the old feelings came crashing back. Elizabeth and Brome were so in love but between misunderstandings and a little bit of comedy will they get back together,
This was a more comical part of the book between the misunderstandings and the fact that Brie keeps calling Jason a dud. You will be laughing and cheering for them , you also might want to scratch a few eyeballs by the time you are finished,

BOOK THREE: HEXING HER EX by Boone Bruxe
In the final installment we have Stephanie's and Carson's wedding coming up and Bri and Jason are together. Two of the three aunties are with their true loves . Now its Lexie's  and Cassandra's story this was a story that has a lot going on. Cassandra is the oldest and the craziest aunt. She was a hoot to read. As the story goes on we find out that Abigail did a dirty on Cassandra that ended up getting Cassandra killed. Lexie is drawn back to her old boyfriend and they work their way back to each other. There is an epic ending to the book that you will love,
So over all review of all three books, they were great , you have the HEADLESS HORSEMAN , check. Hilarious but ornery 250 year old aunties ,who are meddling ghosts. The men in their lives both ghosts and real are true men with lust in their eyes and love in their hearts and three sisters that will do anything for each other, even getting cursed to help each other out.

This is a humorous set of book that will make you laugh and cry. The three authors did a great job telling each of the stories . It is such a great twist on the HEADLESS HORSEMAN STORY check it out
Posted by BOOKS TO CURL UP WITH at 7:34 AM