Good Monday everyone hope you had a great weekend. Ours wasn't so well broken equipment and so on.It did give plenty of time for reading between thunderstorms and I was honored to read ATHENA'S ORACLE by J.D BROWN 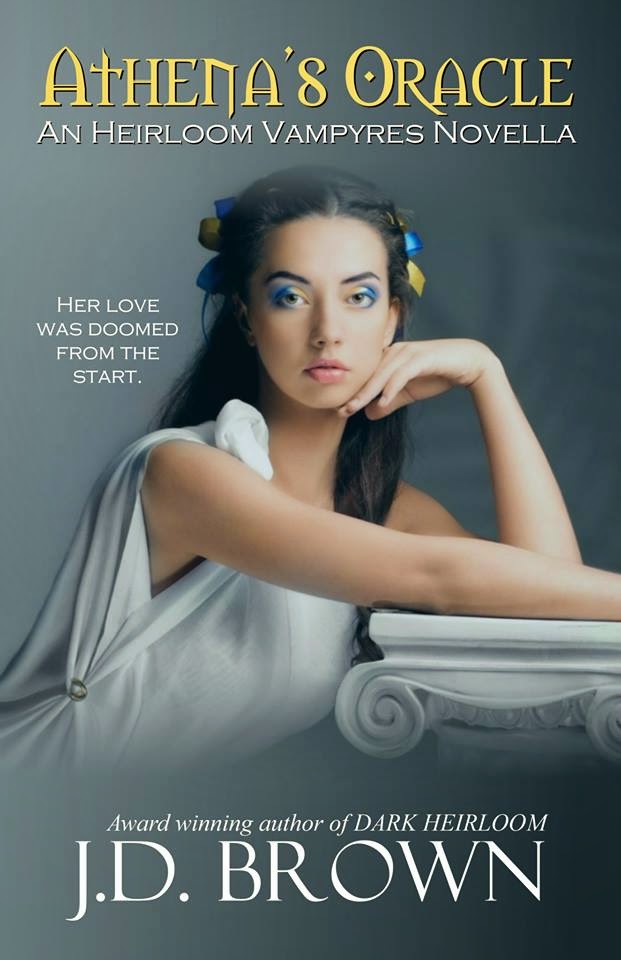 Her love was doomed from the start...

Leena’s ‘gift of sight’ secures her place as the next great oracle of Athena. Instead of being groomed for wifehood like other girls, Leena spends her days within the walls of the Acropolis, shuffled around by the clergy and doomed to be a virgin forever. Before her ascension, Leena decides to take matters into her own hands. With the help of her father’s book of alchemy, she casts an incantation calling forth her own personal hero. But when that hero turns out to be a rogue vampyre prince with a haunted past, Leena begins to question if her feelings for him are the work of divine intervention, or a love spell gone horribly wrong.

Athena’s Oracle is a prequel to the novels Dark Heirloom and Dark Liaison, also by J.D. Brown. Set in 4th century B.C.E., Athena’s Oracle chronicles the romance between Leena and Jalmari during the very early trials of their immortal lives.

All books by J.D. Brown:

Dark Heirloom (book 1)
Dark Liaison (book 2)
Athena's Oracle (prequel)
Dark Becoming (book 3 - available 2015)
Dark Ascension (book 4 - TBA)
MY REVIEW
I was so excited when J.D announced that she was going to write Jalmari and Leena's story. She started the book out as a web only book. We got one chapter a month. Which kind a drove me insane cause I will admit to no one but I was invested in all the characters in the DARK HEIRLOOM series. Yeah I know you are all shaking your heads but fur us avid book junkies being invested is a good thing. So I knew that I wanted to get to know Jalmari more cause he intrigued me to no end. He was so evil but deep down inside you knew he had to care for someone. That one person was Leena the little oracle was doomed to be be shuffled off between the clergy and was doomed to stay a virgin until she died. Well Leena being Leena took matters into her own hands and used a spell to call her own personal hero. Not know that he was going to be a vampyre. They are so different but so similar . They are a very unlikely couple but they work so well together. Jalmari is so intense and Leena makes him think of some other then himself and his crazy ass father that is taking up space n his head.
I loved this book J.D takes to a place where you want to hate but you fall in love all of her characters. Even when they are evil you still want to help redeem them. Dang her she made me like Jalmari. Trust me if you read the other books you will not really like Jalmari. Trust me I really wanted to stake him a few times. This book shows us the softer sweeter side of the characters. The more innocent times . They act like any other young couple finding their way to each other.  There is a love story among the wanting of the spell to help him out.
J.D will transport you back to Ancient Greece in this book, You can feel the atmosphere and the sounds of Greece as you read. The tale is bittersweet and even though I read the other books and knew what was in the future for this couple. I devoured every single page of this book. J,D writes with such intensity, you feel the characters and the agony and the elation that they have.
I would suggest you read this book first and dive into Dark Heirloom so you can understand a little more about what makes Jalmari tick in book.
I SUGGEST THAT YOU READ THIS BOOK CAUSE I PROMISE YOU , YOU WILL NOT BE DISAPPOINTED AT ALL
Posted by BOOKS TO CURL UP WITH at 8:50 AM