Wow I can't believe that Christmas is over and its almost 2017 so I am giving you one last review for the year. I am glad its this author , I absolutely love this lady and her books . LEGEND OF LOVE by Lisa Kessler . 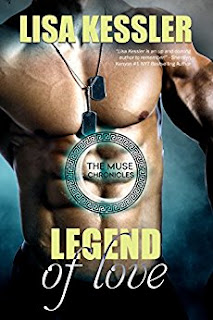 The Prophecy - "Every generation the nine daughters of Zeus are reborn, and with their rebirth are also nine Guardians. They will be marked by the gods, and given gifts to protect his treasure. Their abilities will only be unlocked when they find their muse."

Callie O'Connor's life has never been the same since the Muse of Epic Poetry came alive inside of her. Now she's on the other side of the country, working as civilian psychologist for the Navy, and leading her Muse sisters in their quest to reopen the Theater of the Muses.

But nothing could have prepared her for Hunter Armstrong. He's a Navy SEAL, driven, confident, and dangerous. And he plans to do more than just protect her.

The gods couldn't have picked a better Guardian. But as Hunter soon discovers, Callie has some skeletons of her own in the closet, and loving her could lead to his destruction.

MY REVIEW
This is the second book in the Muse Chronicles . This is a great new series and in book two we are introduced to Callie and Hunter . Callie is a psychologist working for the Navy but she is more then that . She is also the Muse of Epic Poetry and the leader of the Muse sisters .  Hunter Armstrong is a Navy Seal, who is dangerous , sexy and all out alpha . When they meet its sparks that both of them want to deny . Will they survive each other and the titans  to figure out how much they mean to each other .
The characters are so well written and complex . Callie is a complicated woman who thought that she was all in for the Muses , she has some skeletons in her closet . After loosing her best friend she has closed herself off from finding any kind of love You see her grow more and come into her own as you read  the book . Hunter is the man of your dreams . confident , kind of dangerous , he would lay down his own life to keep you safe. But he also has his secrets and you want to hold him tight and pull those secrets out of him . Together they are a force to reckoned with , they will keep you on your toes through out the book .  I really loved these characters and really got invested in them as I read
This was a fast read for me , I finished it in one evening , I got so wrapped up in the story and the characters .  This story mixes Greek mythology and hot sexy couples . I must say it really works . The action and fast paced and the sex is well lets just say have a fan and some ice on hand . So if you want a great evening read  with sexy alpha men and the women they are sworn to protect check out the MUSE CHRONICLES  by Lisa Kessler
Posted by BOOKS TO CURL UP WITH at 8:10 AM