Books to curl up with: HAPPY MONDAY ALL

Books to curl up with: HAPPY MONDAY ALL:    Happy Monday all today we are going to review a new genre of book for me .  Its Steampunk fantasy . So let me introduce you to GEARS OF F...
Posted by BOOKS TO CURL UP WITH at 1:33 PM No comments:

Happy Monday all today we are going to review a new genre of book for me .  Its Steampunk fantasy . So let me introduce you to GEARS OF FATE (Forgotten Gods book 1) by Wilbert Stanton 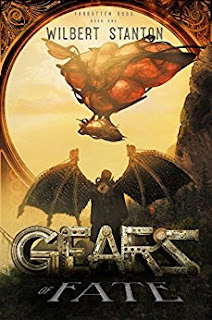 Centuries have passed since the Fey conquered Earth, forcing mankind and gods alike to flee to the sky city Olympus. Forgotten gods walk amongst man, lost and powerless. Little do they suspect a second Fey war looms, and an unlikely duo will set in motion the gears of fate.
Zak Walker is a fringe rat living in the slums who would do anything to protect his sister, Alice. His neglectful father threatens to consign him to a life away from home on an airship, but he yearns for his life to mean something more than drudgery.
Princess Seneca Rose is the last surviving member of the Seelie royals. They tried to establish peace with mankind, but fell to the forces of Queen Mob and the Unseelie Court. Fleeing for her life, Seneca arrives on Olympus in hopes of uniting the forgotten gods against the oncoming Fey.
Zak couldn’t care less about the fate of Olympus, until faeries kidnap Alice. He doesn’t believe Seneca’s stories of faeries or gods, but soon has no choice but to accept their lives are intertwined. All his life, he’s dreamed of something more. If he cannot face the dangers that await down on Earth, the gods, mankind, and his sister Alice are all doomed.

MY REVIEW
This book has it all fantasy , gods , fey and steampunk . There is intrigue and add a dash of romance .   Love how the author mixes the Norse and Greek gods with ease .  They are intertwined with fairy tale ideals . The main character is fun and you really get in his head while reading . The story is a great twist and had me turning pages . I couldn't put the book down .
The characters are well written and complex . The lead character Zak is just a poor young man trying to make it in the Fringe . He is keeping his sister Alice safe from his dad . When you first meet him you kind of want to swat him upside the head , he seems kind of arrogant . But as the story goes you see him become the warrior that Olympus needs .  He grows up and finds out that he is more then the fringe rat he thought he was . Seneca Rose is the fey princess that literally drops into his lap . She is sassy and a runaway from the unseelie court . As we read we find there is also more to Seneca then first appears . There are so many characters in this book that add to the hilarity of the main characters . Everyone from Odin and Freya to Zeus and Loki . Olympus is a character all in own . A city floating in the sky on the power of cogs and gears .
I truly enjoyed this book . The action was fast paced and the characters were amazing . I laughed all the way through this book . Seneca kept me in stitches  and Zak and all his fumbling was great . I love how the author mixed up the mythology and had them working together . That made a great twist on the subject . There was a couple of spots I kind of felt it dragged just a little but over all this was a very enjoyable book . I must say that this author has me intrigued with steampunk , he made it fun to read .  I am going to look into more of this authors books . So if you enjoy mythology with steam punk added check it out

Posted by BOOKS TO CURL UP WITH at 1:19 PM No comments:

Books to curl up with: GOOD MORNING EVERYONE

Books to curl up with: GOOD MORNING EVERYONE:  OMG are the only words I have to say for todays blog post . We are doing the cover release for a sexy new series by Pam Godwin , Are y...
Posted by BOOKS TO CURL UP WITH at 7:33 AM No comments: 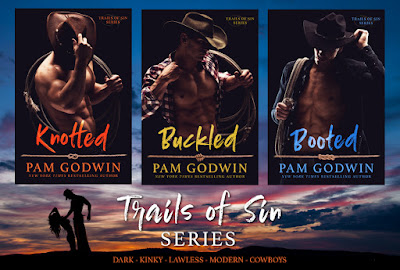 OMG are the only words I have to say for todays blog post . We are doing the cover release for a sexy new series by Pam Godwin , Are you all ready for some sexy ass cowboys . WELCOME TO THE TRAILS OF SIN SERIES . 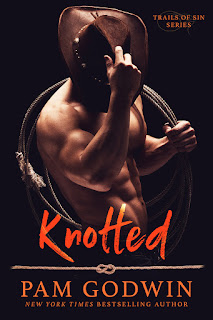 KNOTTED Blurb →
I try to forget her.
It’s impossible.
First love, first kiss, first…
Not all our firsts
We were sixteen the night she was violently assaulted while I helplessly watched.
I’ll never forget the sounds of her suffering.
Or my inconsolable agony when she left Oklahoma.
Years later, she returns to honor our teenage pact.
Except the boy she loved is gone, replaced by a ruthless cattle rancher knotted with secrets.
She doesn’t know my dark cravings or the trails of sin that lead to her
I don’t deserve her, but one truth remains.
She’s mine.
TO BE RELEASED
Knotted #1: May 1, 2018
Preorder links →
Knotted #1: https://books2read.com/knotted
book 2  BUCKLED 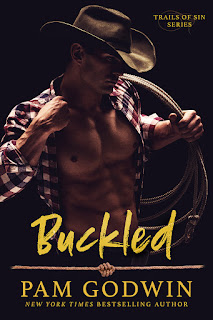 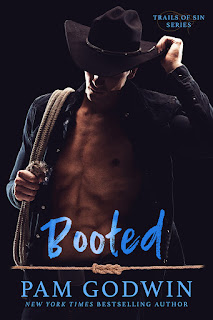 Booted #3: Sep 18, 2018
Booted #3: https://books2read.com/booted
ABOUT THE AUTHOR
New York Times and USA Today Bestselling author, Pam Godwin, lives in the Midwest with her husband, their two children, and a foulmouthed parrot. When she ran away, she traveled fourteen countries across five continents, attended three universities, and married the vocalist of her favorite rock band.
Java, tobacco, and dark romance novels are her favorite indulgences, and might be considered more unhealthy than her aversion to sleeping, eating meat, and dolls with blinking eyes.
author links
Website → www.pamgodwin.com
E-mail → pamgodwinauthor@gmail.com
Amazon → www.amazon.com/Pam-Godwin/e/B00A3AF2LY
Goodreads →    www.goodreads.com/author/show/6474204.Pam_Godwin
Instagram → www.instagram.com/pamgodwinauthor/
Bookbub → www.bookbub.com/authors/pam-godwin
Facebook → www.facebook.com/pamgodwinbooks
Twitter → www.twitter.com/pamgodwinbooks
Pinterest → www.pinterest.com/pamgodwinauthor/
PAM'S OTHER BOOKS
Tangled Lies Trilogy:
ONE IS A PROMISE (FREE): https://www.amazon.com/dp/B06Y3JTM29
TWO IS A LIE: https://www.amazon.com/dp/B06Y68P2CZ
THREE IS A WAR: https://www.amazon.com/dp/B071J8RN7P

Posted by BOOKS TO CURL UP WITH at 7:27 AM No comments: