Books to curl up with: WELCOME TO MONDAY

Hey its Monday and it is my birthday and I have the third book in the Touch of Ink series  by Rachel Rawlings. 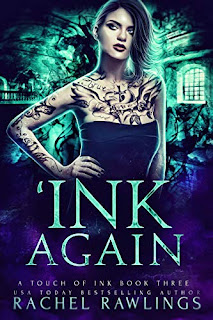 Adeline Severance's dangerous, magical double life has finally caught up with her.

Adeline stands charged with high treason for the practice of warding - and cutting into the Magistrate's profit margin. With the odds stacked against her and nowhere left to hide, Adeline Severance must face the Magistrate and their corrupt system of justice without a single ounce of magic.
The only thing left standing between Adeline and a lead line box is a paper thin defense and a short list of allies. Fortunately for her, the Goddess counts herself among them. All she has to do to gain her freedom is stick to the plan and keep the faith.
But freedom isn't always free and this time it just might cost Adeline her heart.
MY REVIEW
Adeline is living a double life and it has finally caught up with her. She has had her magic bound and and she is being charged with treason because she has been practicing warding . She is one step to a lead box is a little haphazard  defense and a small . Will she be able to find her way out and will she come out with her heart intact.
Adeline is a character that you will love . She is feisty and you want to be her friend. She is strong willed and just want to live her life. She is a well written and very complex with each book . Nicholas is the man she loves but right now he is not her . He is hot and sexy and there are moments when you want to climb him like a spider monkey.  I really like him. There are more characters that you want love. They are complex and so well written.
This is the final book in the series and I was waiting for it . The author takes us on a wild ride that will have you on the edge of your seat most of the time .  The characters are well written and complex . I really enjoyed this series and the tattoo aspect of the story.  Tattoos have a special place in my heart so when I heard about this series I was hooked .  I would read this story in order . So if you want a great series for your summer reading list check it out .
Posted by BOOKS TO CURL UP WITH at 8:36 AM No comments:

Books to curl up with: HAPPY TUESDAY

Books to curl up with: HAPPY TUESDAY:  Good morning all hope your Tuesday is going well . Today I have the new book by Bree Lewandoski. CONSEQUENCES TO OUR PLANES OF EXISTENCE.  ...
Posted by BOOKS TO CURL UP WITH at 7:50 AM No comments:

Good morning all hope your Tuesday is going well . Today I have the new book by Bree Lewandoski. CONSEQUENCES TO OUR PLANES OF EXISTENCE. 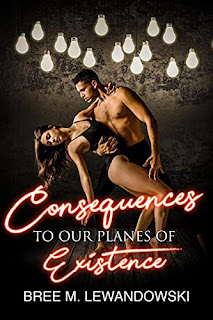 The life Diana worked so hard for is falling apart.

As a dancer, the body is everything but something is wrong with her body. She can feel it. All these strange aches and pains. Yet the show must go on. So, she ignores it.

Until she can't anymore.

The man she's been paired to dance with has a voice like midnight summers and she'd love to dance the hours away with him; however, the onset of Lupus throws everything between them and everything she's worked her life to have helter-skelter. Either she stands straight or falls six feet under. .

MY REVIEW
Diana is a principle dancer in a prestigious ballet company and aches and pains come along with that commitment . She knows there is something wrong the pain is new but she ignores it. There is the moment that she can't over look the pain any longer . The man of her dreams comes into her life and when they dance it is beautiful . When Lupus takes her down and throws a kink into her plans . Will she be able to stand tall or will the lupus take her down .
The characters in this novella are well written . We get to see Diana fight to keep going . She is a dedicated dancer that well has the fight of her life ahead of her . There are moments where you do want to shake her cause she will not take care of herself . Demetrio is a dreamy guy . He is sweet and man can he dance .  He is passionate and wants to take care of those he loves. He is a wonderful character and together with Diana become a complex couple .  Dance is also its own character through out the book.
This may be a novella but it is packed with an intensity that could rival most full length novels . The author really takes us on an emotional roller coaster ride. You are on the edge of your seat most of the way through the book . The story is a fast read and you can have it read in an evening . The only thing I wish for is that we could of had more time with the characters . Over all I truly enjoyed this story and wonder if the characters will be back. So if you want a book that you can read in the hammock this summer check it out
Posted by BOOKS TO CURL UP WITH at 7:44 AM No comments:

Books to curl up with: ITS TIME FOR A BLOOD PACT

ITS TIME FOR A BLOOD PACT 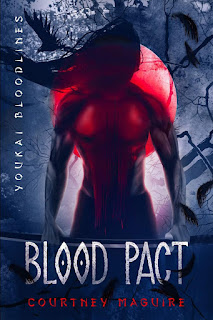 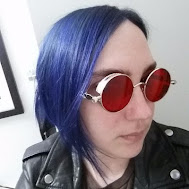 Courtney Maguire is a University of Texas graduate from Corpus Christi, Texas.
Drawn to Austin by a voracious appetite for music, she spent most of her young adult life in dark, divey venues nursing a love for the sublimely weird. A self-proclaimed fangirl with a press pass, she combined her love of music and writing as the primary contributor for Japanese music and culture blog, Project: Lixx, interviewing Japanese rock and roll icons and providing live event coverage for appearances across the country.
Her first novel, WOUNDED MARTYR, is a 2019 RWA® Golden Heart® Finalist in the Contemporary Romance: Short Category.
You can find her on social media: Facebook, Twitter or at www.courtneymaguirewrites.com
EXCERPT
A samurai of his reputation didn’t come into town without being noticed, and I was able to get directions to his house from the second person I asked. I stumbled through the narrow streets to an estate in the shadow of the Imperial Palace. It looked like a palace itself, with sweeping tile roofs peeking over a high stone wall. A small torii marked the entrance to a shrine no bigger than a closet on the south corner, the smell of burned incense still hanging in the air around it.
Standing in front of his heavy wooden gate, I bunched my hands in the sleeves of my kimono. What was I doing here? I couldn’t ask him for help. The problems of a geisha were far beneath him, and he’d already done more than his fair share for me. I told myself I just needed to thank him, maybe apologize for the brush-off I’d given him in Ponto-cho.
I took a deep breath and knocked lightly on the gate. “Sakurai-han?” My voice cracked terribly, and I cringed, clearing my throat before trying again. “Sakurai-han? It’s Hiro.”
I leaned closer to the gate, ears attuned to movement. I knocked again, more firmly this time, and the gate swung inward a little.
“Ojamashimasu,” I called softly as I poked my head through the gap.
Lavish gardens abloom with wisteria and hydrangea stretched out before me. My sandals scraped across the stone path that crossed over a pond teaming with koi and led to the entrance of the sprawling estate. The shoji were all closed except one, which was open just enough to give me a peek inside. Lamplight flickered over screens depicting ink-black birds on a field of gold.
A shadow moved inside. My skin flushed hot and cold at the same time. My heart did a strange little dance over my rib cage. I took another step forward and tried to call out to him, but couldn’t squeeze my voice through my clenched throat.
My fluttering heart came to an abrupt stop when I realized he wasn’t alone. Another person stood very close to him, his arms wrapped around them, his head lowered into their neck.
I should have stopped. I should have turned around and walked away, but even though my stomach felt full of pins, I stepped closer. The person he was with—a woman—took shape as I drifted onto the engawa. Slender, fair skinned, modestly ornamented hair in a fashionable topknot. Someone befitting a man like Sakurai Hideyoshi. A person who mattered.
Had I read it all wrong? His complete disinterest in the oiran had led me to believe he was disinterested in women altogether, but maybe it was something else. His reaction to me pursuing work in Ponto-cho hinted at a distaste for the profession. A hollow opened up in my chest. Maybe all he’d wanted was to hear me sing, after all.
She made some small sound, and my insides twisted into something ugly. They swayed together like the interlocked branches of a tree caught by the wind. I shrank back but stopped as the hands that had been knotted in the fabric of his kimono relaxed, went limp, and fell to her sides. Her knees buckled, and Sakurai-han went down with her until she was flat on her back. There was something strange about the way she fell, like the air had all gone out of her.
With a groan, he straightened and sat back on his heels, eyes closed, the back of his hand pressed against his mouth. His cheeks were ruddy, his expression loose and serene as if he were drunk or high. When he dropped his hand, something thick and dark clung to his lips, and his tongue swept across them.

Books to curl up with: ITS MONDAY .

Books to curl up with: ITS MONDAY .:  Good morning everyone welcome to May , I hope you are having a great day . Today I have book 2 in Wanda's Witchery series . SPANDEX SOR...
Posted by BOOKS TO CURL UP WITH at 7:50 AM No comments: