Good Tuesday all , today I am going to review a book that was suggested to me by a friend . She told me that I will be blown away by this book. The book is A COIN FOR CHARON (  MARLOWE GENTRY book 1) by Dallas Mullican 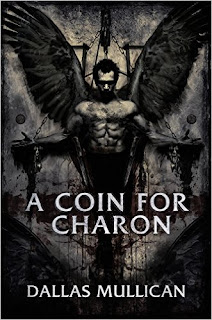 The media has dubbed him the Seraphim Killer. He believes the gods have charged him to release the chosen, those for whom life has become an unbearable torment. Gabriel feels their suffering—his hands burn, his skull thunders, his stomach clenches. Once they are free, he places coins on their eyes to pay Charon for passage into paradise.

Detective Marlowe Gentry has spent the past two years on the edge. The last serial killer he hunted murdered his wife before his eyes and left his young daughter a mute shell. Whenever she looks at him, her dead eyes push him farther into a downward spiral of pain and regret. He sees the Seraphim as an opportunity for revenge, a chance to forgive himself―or die trying.

Gabriel performs the gods’ work with increasing confidence, freeing the chosen from their misery. One day, the gods withdraw the blessing―a victim he was certain yearned for release still holds the spark of life. Stunned, he retreats into the night, questioning why the gods have abandoned a loyal servant. Without his calling, Gabriel is insignificant to the world around him.

He will do anything to keep that from happening.

One word for this book is WOW , I can not believe that this book is this authors debut novel. I was blown away with the way the author tore at my emotions. There hasn't been an author in awhile that has taken me to the pits of hell and pulled me back out. This book will leave you in a big puddle of emotions . Trust me I  cried , I was disgusted and I even let out a chuckle or two and then there was the night I couldn't sleep , well you will have to read the book to find out.
Dallas has created a story that goes beyond the story of the serial killer . He dives into the people that are dealing and the people trying to stop him. In this story we have four main characters. Gabriel a young man , down on his luck but helps out others but also there is a dark side to him . He is quiet and helps people but his dark side is really dark. He thinks he is doing the Gods work and when he murders, he thinks he is saving them. He thinks if he does enough that he will become one of the gods. As you read you start Gabriel's story , you start to feel sorry for him. He has been through so much and you start to wonder if he can be saved. Then there is Becca  Drenning, this is a character I kind of wanted to slap a few times , well because I understand where she was coming from , she was an abused woman and it hurt me to read what she went through. But you see her grow and bust out and come into her own as the story progresses . As she fights to stay alive she falls for Detective Marlowe who is such a tortured soul. He has had a really bad two years after seeing his wife die. He can't process all that has happened . But, he struggles through each day to try and catch the killer . You see him fight with his inner demons through out the book and you want to cheer for him. The final tragic soul that we hear from is Max, now this poor man has no luck at all and you just want to wrap him up in a blanket give him hot chocolate and keep him safe. They all have their stories in the book, but as you read they all come together in an ending that blew my socks off . Didn't see it coming
I must say this book is very well written and the writer takes us on such a journey. The plot is well developed and the characters are so complex. You will be sucked in by the end of chapter one. I was reading well into the night. This book will make you think. What would you do if placed in the situations these characters are in ? How would you change the circumstances if you could? Trust me you will be so engrossed in the characters and the story will blow you away . If this is his debut novel I can't wait to read the other books he will write. So if you want to be blown away by a book check it out . You will not be disappointed.