Today I want to share a new book by Cree Storm .FIGHTING HIS FATE 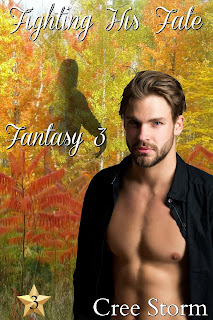 When you lose your friends, family and livelihood all because you saw Bigfoot how can that very being convince you that you are his one and only...his mate? That’s what Lake must figure out and fast. He is Bigfoot and Zach is his very angry and jaded mate that hates his kind, but Lake will not give up. Plane crashes, hunters, and the fear of death will not stop him in his quest to get his man.

Lake watched as the three men walked towards the ranger station. He just hoped the idiots would stay far away until he could get his mate the hell out of there.

Calling upon his senses Lake knew Zach was heading back to the crash site. Rushing to get to him before the others returned or the pricks parents arrived. He was almost to the site when he remembered he couldn’t approach Zach in his Sasquatch form. Transitioning back to his human form he was ill prepared to hear the gasp, “What the fuck?”

Turning Lake realized his fuck up. Zach stood there, rifle hanging down his side, eyes wide and skin pale.

“Zach, let me explain.” Lake said taking a step forward only to stop when Zach stepped back shaking his head.

“What the fuck are you?” Zach rasped out the fear in his voice breaking Lake’s heart.

Sighing heavily, Lake tried taking another step but Zach shocked the hell out of him when he raised the rifle and aimed it at Lake. “Take another step towards me and I’ll blow your fucking balls off.”

“Don’t you mean kill me?” Lake said with a snort.

Shaking his head,  Zach shocked him when he replied, “No. If I blow your balls off you live and I need you alive so I can find out what you did with my brother.”

Lake was confused. What did he have to do with Zach’s brother?

“Don’t look at me like you don’t know what the fuck I’m talking about. You took Baily from me and I want him back! Now start talking or I swear to god I will blow your balls off then your knees one at a time and don’t think I’ll miss either. I was top in marksmanship in my squad. Now talk.” Zach hissed out.

Holding up his hands in resignation, Lake said, “Okay. Okay. But I really think we need to get far from here first, Zach. Other’s are coming. I heard Johnny Ray talking to his parents. They’re on their way here and I don’t think you want to be anywhere they are.”

Zach snorted, “I don’t want to be anywhere you are either but you left me no choice. I want to know where my brother is. Now!”

“I don’t know! I...” Lake could hear motors running and knew their time was about up. “Please, Zach. I swear I will answer any and all your questions I can, but we really need to get out of here. People are coming.”

Zach looked around, saying, “I don’t hear nothing.”

“Yes well you aren’t Wetiko. Please, we need to go. Their getting closer.” Lake said anxiously.

It took a moment before Zach gave a sharp nod. “Fine, but if you make one wrong move and I promise you I will shoot and then take my chances with the others. I have enough bullets for everyone.”

Lake turned, “I won’t try anything, Zach. Please, follow me.”

They walked for almost an hour, Zach not saying a word and Lake not really knowing what to say. He had come here for his mate. He knew this time would come, but now that it was here, Lake was terrified. Not of Zach shooting him, although that was a possibility, but he didn’t know how Zach was going to react to their situation or the explanations he would have to give about his people and what Lake was asking of Zach.

“I think we’re far enough.” Zach said none too politely.

“We’re not far from my lair. It’s a good spot. We’ll hear and see anyone coming from it and I have food and drink.” Lake said continuing forward.

“I don’t want your food or your water, Lake...if that’s even your true name. I just want my brother and proof.” Zach stated firmly.

Lake stopped and turned to Zach, “Proof? Proof of what?”

I was born in Fort Knox, Kentucky. I’m a military brat that travelled a bit overseas and throughout many parts of the United States. I finally settled in Las Cruces, New Mexico, where I eventually got married and then divorced. I was blessed with two fantastic sons. As they grew up and became young men chasing their dreams, I felt that maybe now was the time for me to do the same. That’s when I started writing. Never in a million years did I expect to meet the most wonderful man in the world, move to Quebec, Canada, and get married. However, that is exactly what happened. JP has introduced me to things like; canoeing, snowmobiling, four wheeling, and has taken me to some of the most beautiful locations. Ones that I had only ever seen on a computer or read about in books. I may miss my mountains and my boys, but have discovered that when you work towards your dreams, the future can be one filled with happiness and love. My boys are only a plane ride away, and Skype is a glorious thing. So I say, on to my next adventure…don’t be shocked to find it in one of my books.