Good Wednesday morning all . today I have book six in the Mists of Magic and Mayhem series . TEMPTATION'S CROWM  by HP Mallory 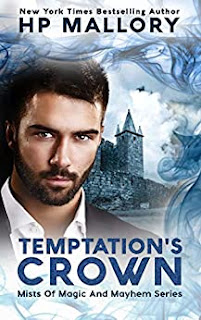 Rowan is just a child, but living in the world she is has forced her to grow up, faster than maybe she should have. When she’s attacked and nearly killed, the most unlikely of allies will come to her defense…
Pagan knows he shouldn’t trust Nyx and yet, he can’t help but feel like he’s falling for her. But when he agrees to infiltrate the Masked Magistrates in order to steal a lodestone, they will both find themselves in a situation they didn’t bargain for...
Stone is frantic. Emma has been abducted by possessed students, Clark at the forefront. Meanwhile, Stone, Jupiter and Kevin are imprisoned in the one place they’d turned for refuge. How will they escape and what will this delay mean for Emma?
And what happens when Jolie is reunited with her sister and her closest friends?
MY REVIEW
,  In book six things start to get wild . Jolie and Bryn are back together but Bryn is still not trusting the vampire she still loves but won't admit it . Rowen is in trouble with things trying to capture her . Emma well she is taken away from school and its not a good thing .  Sinjin and the guys are trying to get out of the Abyss . Stone is frantically trying to find Emma . Pagan is falling for Nyx and that just can't be good when they are in a difficult spot when trying to steal the lodestone . I mean what could go wrong
Well in book six we get to see a lot more action and the characters are starting to really becoming like your best friends . I love how the author brought some secondary characters into the foreground . Kevin and Jupiter really start to shine in this book. They really help Stone to find Emma . Sinjin and Bryn are at it again , the short lived truce is done and they are back to their scraping . Bryn is really just being a big baby when it come to Sinjin. Sinjin is being as debonair as always .  I love these characters and they are getting more and more complex as the stories go on .
This book has more action going on and each character seems to be coming into their own . The author takes us on an action packed ride . I love this series and the characters . They are like coming home to old friends when you read them .  This is a fast read and you will totally be like I can't wait for the next book in the series . I would say read this series in order so you can get the full effect . Check them out I promise you will not be disappointed
Posted by BOOKS TO CURL UP WITH at 7:45 AM