Welcome to Wednesday everyone. Today we are reviewing LETHAL CODE by Thomas Waite. 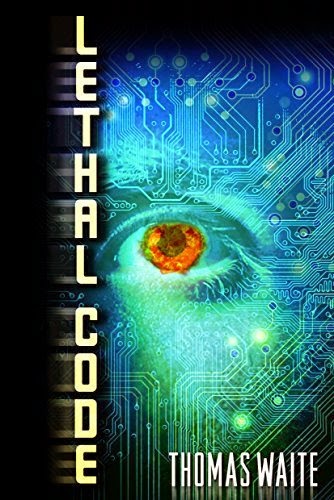 America’s worst nightmare has come true: a “cyber–Pearl Harbor” attack by unknown terrorists has crippled the nation’s power grid—and brought the land of the free to its knees. As widespread panic and violence ravage the country, its ruthless captors issue their ultimatums…and vow an apocalyptic reckoning.
A defenseless nation scrambles to fight an invisible invasion. Chief among America’s last line of defense is Lana Elkins, head of a major cyber-security company—and former top NSA operative—who returns to her roots to spearhead the Agency’s frantic efforts to combat the enemy’s onslaught on its own terms. While she and her superiors take action to infiltrate a terrorist hotbed overseas, much closer to home ruthless jihadists with a nuclear bomb hijack a busload of schoolchildren—including Lana’s daughter—and race toward a rendezvous with Armageddon in America’s greatest city.
With Lethal Code, Thomas Waite raises the international techno-thriller to dangerously exciting levels—introducing a valiant new action heroine, and initiating a series that brings a harrowing new edge of realism to sensational speculative fiction.


MY REVIEW
This is the first novel I have read from Thomas Waite. I was pleasantly surprised . Tech thrillers are a new genre for me. I started reading this over Easter weekend and I couldn't put it down. I was turning pages well into the night. It made me think of what would happen if the world's technology was hacked and held for ransom. What would governments do?
This story is based around a cyber attack that cripples nearly everything in the U.S . They take everything down , the power grids , nuclear power plants , They cause a nation wide black out that causes thousands to die in terrible accidents. That is their initial show of force , their ultimate plan is to destroy the U.S with their own nuclear missiles, basically wiping out North America.
Along comes a small but but plucky group of intelligence and security experts . Led by Lana Elkin, she is the head of a cyber security company. She heads back to her roots and heads up the group to find the hackers and stop a world war . They have to do the undoable and find them before they destroy the U.S
The characters in this book are well written, and plot was tight and fast paced . The character of Lana was well written , she was a tough as nails woman but had a softer side to her also especially with her daughter. The story takes us on such a journey , this is a fast paced tight read. The techies will love the all the technical jargon and those of us that aren't that technological savvy won't get lost. Trust me I am not that tech savvy and I didn't get lost in all the jargon. There is only one thing that kind of had me lost is when Lana left her underage daughter basically alone while the world was ending. Other then that the book was awesome .
So if you want a totally different read and you like thrillers and trying to figure out who it is . This is the book for you .