HAPPY FRIDAY EVE everyone man have I got the book for your weekend.  PERK NOIR  A Mason Barnes mystery by Chris Garson . 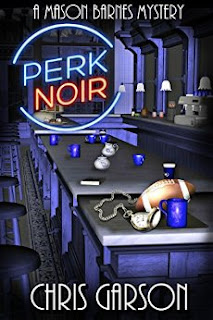 Meet Mason Ezekiel Barnes, former NFL tackle turned successful author of the naughty ninja adventure series Mia Killjoy. Mason is obsessed with winning a Pulitzer and is thwarted by his fellow author and nemesis, the twerpy little gnome Conrad Bancroft. Mason spends his days writing at a local cafe, Perk Noir, the one-of-a-kind jazz coffee shop where he and Bancroft ply their craft. The joint is thick with mysteries. Mason is obsessed with the life of jazz great Earl ‘Lightning’ Perkins, the legend and former owner of the Perk Noir. Mason is convinced that Lightning has a hidden past and he’s determined to find it and catapult himself to greatness and the coveted Pulitzer once he writes his greatest story yet. One day, unexpectedly in walks Shelly, a Mia Killjoy super fan girl who happens to have a mysterious pocket watch she recently inherited from her grandfather. Shelly convinces Mason to assist her in unravelling its history. Join along with Mason and Shelly as they find themselves embroiled in a deeper mystery than they could ever have imagined, full of twists and turns, and surprises that pop up around every corner. Perk Noir is full of comedic relief, pop culture, NFL, jazz, a little touch of romance, and flashbacks of Lightning and his family during both the first half of the 20th century and later during the Civil Rights movement. Mason and Shelly and their adventures is a fun filled thrill ride that will appeal to all readers, there is something for everyone at the Perk.

MY REVIEW
I must say that I was intrigued when I was told about this book. I am a sucker for a well written mystery and I must say this one is very well written . Who knew that you could write a mystery with a coffee shop as the center of all what goes on . This is where we meet Mason a big ole country boy , ex football player and writer.  We also meet the memory of Earl Lightening Perkins a jazz player and former owner of Perk Noir. The story will take you on an adventure as you read there is also a second part to this book and its about concussions in the NFL and it adds to the story very nicely.  I won't go into anymore detail about that part , you have to read that for yourself .
I will say the characters are so well written and complex . The main character in the book for me is actually PERK NOIR, the jazz inspired coffee house. The shop holds so many memories and secrets that are just waiting to be unraveled. Mason is a good ole boy who use to play football, loves his dog and writes about a spy named Mia with her killer vagina . He is also on a quest to become an all knowing Perk kensie on all things lightening Perkins . When we first meet Mason  we think of him as a good ole boy that loves his coffee and writing . As the story goes along there is much more going on inside that head of Mason's. He is suffering from something that happened in his NFL days that are making him rethink his sanity at one point . When we meet Shelly she is the quintessential fan girl / cosplayer . As we watch her and Mason grow closer we see them both mature and become more to each other then they want to admit. She is the kick in the ass that Mason needs to get through what he needs to do . To me they are a pretty kick ass couple that grow stronger with each turn of the page.
This book is a great weekend read . The author takes us on such an adventure and mixes in a little danger and romance.  This book had me reading well into the night I just couldn't put it down . To me it had it all, history, some good comic relief and great pop culture references that will keep you reading . The big twist at the end was a mind blower for me . I so didn't see it coming at all . I must say that I was giggling and laughing at a few scenes in this book and I was also on the edge of my seat throughout most of the reading . the author balanced the comedy and the seriousness of the book quite well .  I will also tell you and give you fair warning . If you start this book in the evening you will stay up late and have a book hangover. So if you want a great read for the lazy days at the cabin check it out .
Posted by BOOKS TO CURL UP WITH at 7:57 AM