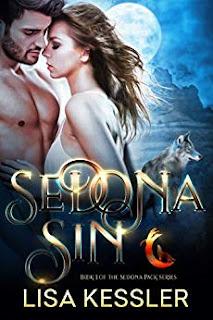 A new Alpha will rise...

Asher Mateo's future was stolen the night the Sedona Pack Alpha marked him to be bitten. Drafted into the werewolf Pack, Asher was forced to become a man he hardly recognized. After heading up a rebellion to overthrow their Alpha, Asher can't wash the sins from his hands and yearns for a fresh start. But he can't bring himself to leave Naomi and her twin boys. Without a strong Alpha to lead the Pack, all their lives are at risk from a new threat who will stop at nothing to expose shifters to the world as blood thirsty killers.

Naomi Rossi used to be a graphic designer with a black belt in karate and deadly aim with ninja stars, but under a full moon a wolf bite left her changed forever. Now she's a single mom to her twin boys, and doing her best to help her friend Asher see himself the way she does, as a leader. But a passing touch, threatens all of her plans as her wolf recognizes this man is destined to be much more than a friend...

MY REVIEW
What do you do when your pack needs and alpha and the old alpha is dead . Asher Mateo's life has been turned upside down . Ever since he was bitten by a member of the Sedona pack and their evil alpha.  Since the old alpha was overthrown and the old pack has been stopped . Asher and the rest of the ragtag wolves have been trying to come together . He has done everything in his power to protect Naomi and her twin boys . But they need an alpha and Asher is the man for the job . But can he step up and bring the pack together before Nero comes and kills them all .
I am so happy that there is a new pack and new characters to swoon over .  Asher is well he is so very swoon worthy . Tall and sexy and a smile that would melt your heart . There is more to him then just being sexy . He is sweet and lovable, you will either want to climb him like a spider monkey or hug him tight and take care of him. Naomi has been through so much at the hands of the old alpha and she just doesn't trust anyone . She is as tough as nails to keep her boys safe .  I really like her, she doesn't take anything from anyone , she is strong and speaks her mind. She is a fierce protector but yet is vulnerable . You guys will love her , she is pretty awesome . The characters are great on their own but together they are a team that can't be beat .
I was so excited when i heard the author was going back to the wolf pack and creating a new series and continuing the story with new characters and a new pack . The characters
are so well written and complex. You can really feel for them and you start to care for them . You want them to be happy and get their acts together . The author has created a whole new pack but they still have the old enemy the jaguar assassins from Nero . I love that she kept that aspect. The story has twists and turns that will keep you reading well into the night.I can't wait to read more stories of this pack and see where the author takes us . So if you want a great shifter book check out the SEDONA PACK   you will not be disappointed