Good morning I can't believe its almost over 2019 and it seems like I have the best books for last . Today I have the fourth book in Peyton Clark series . IF YOU'VE GOT IT HAUNT IT by H.P Mallory . 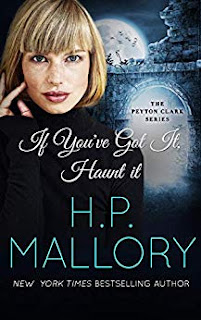 Having two men in your life, vying for your attention, is hard enough, but what if one of those men is dead?

Peyton Clark moved to New Orleans with two thoughts in mind--to escape a bad marriage and to fix up the huge mansion her great aunt left her. While her bad marriage becomes a thing of the past, her ownership of the house on Prytania Street is threatened. By whom? None other than a relative of Drake's, the ghost who happens to be haunting Peyton's house. Luke Montague is the embodiment of Drake in everything but disposition and he's proving to be a big thorn in Peyton's side.

To make matters worse, Peyton's health and her very sanity is suffering by some unseen force. Visions of ghosts dance in her head, warping her understanding of what's real and what isn't. Furthermore, these visions prove to be a warning of a larger threat that's impacting the city--antiques are going missing, stolen by the ghosts of children.

When Peyton gets involved, she'll face more than she bargained for--including witches, possessed dolls, a strange dog, ghostly pirates and her teenage niece.

Join Peyton Clark on her fourth adventure and prepare yourself for an ending that will knock your socks off!

MY REVIEW
Welcome back to New Orleans where the ghosts live among the living . Peyton is loving what she is doing . She has two men in her life Ryan the sexy next door neighbour and Drake the sexy ghost that inhabits her house . He once spent time in her body . She is torn between these two men , now lets throw in a niece who coming for a visit . To make the whole situation worse she is feeling horrible . Her health is declining and it seems like she is starting to go crazy. With the visions and Ryan drifting away from her . Her health declining and a dog that seems to help her out when she is feeling crappy . Then there is the mystery of antiques going missing being stolen by ghosts of children . Can she survive and will she ever get the happily ever after she so deserves .

I really liked this series I love the characters . Peyton is a feisty woman who can see ghosts . She is a really fun character . I really liked her and guess what I really like her with Drake . Who is dapper and suave . He will melt your heart as you read him  Ryan is a sweet guy too but sometimes he can be a real idiot and you kind of want to hit him over the head cause well he is a male . Like Drake he is tall and sexy as sin . We do get some recurring characters back Lovie is back and trying to keep Peyton safe . We also get a new addition to the family Maggie Peyton's cousin . Don't know what to think of her, I believe there is more to her then we know and I hope the next book will bring her out more .

This is one a newer series by the author and I truly like it . The characters are well written and complex and you truly get invested in them . I love the fact that the story is set in New Orleans one of the most haunted citys in the world . The author takes us on a rollercoaster ride through out this book and you will gladly go along for the ride . The story will suck you i from  the very first chapter. You will get invested in the characters and you will want to hug them or slap them upside the head with a frying pan .  Oh and the ending will make you go what the heck . Its a great ending people and I so can't wait to read the next installment . So if you want a really good series to start your 2020 check it out . I promise you will love it .
Posted by BOOKS TO CURL UP WITH at 7:48 AM