Well its Monday and wow its December 2 already . Today I have an Epic Fantasy for you . DEATH WARDEN  by CJ Stilling . 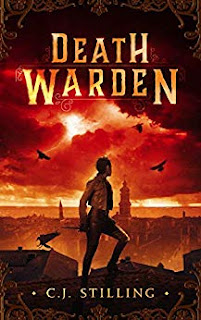 A teenage assassin. An impossible choice. The fate of everything hangs in the balance…

Sixteen-year-old Reen swore she’d never take another life. Divinely selected to assassinate a few in order to save many, she learned to jump from shadow to shadow and claim her victims without question… until she was ordered to kill the boy she loved. But when an ancient plague returns threatening to infect everyone she knows, she is forced to resume her deadly duties.

Battling a disease that turns people into nightmarish monsters, Reen must track down and terminate those responsible before the city falls, and the evil spreads beyond its borders. But the closer she gets to the source, the more she uncovers sinister secrets that will shake the foundations of her world and everything she believes.

Can Reen defend her realm without losing her soul?

Death Warden is an exhilarating YA fantasy. If you like strong heroines, compelling magic, and dark secrets, then you’ll love C.J. Stilling’s imaginative tale.

MY REVIEW
Reen is a special soul at sixteen she is selected to assassinate a few in order to save the many . She learned to jump from shadow to shadow and kill without mercy until the day she is suppose to kill the boy she loves . Then when an ancient disease threatens to take lives she resumes her killing . She must track down and kill those responsible . Will she be able to defend her realm without loosing herself in the process .

There are so many characters in this book . They are all well written and complex . Reen is a streetwise and sometimes too smart for her own good character . She is an orphan who has lived a hard life in her short life . The other characters are not soft characters either , they are just as street wise as Reen . They will draw you in and you will care for them . You will either want to hug them and tell them everything will be ok or smack them upside the head to smarten them up . You will fall in love with all of them .

I will tell you right now this is a long story but it doesn't get boring . The author takes us on an epic rollercoaster ride of emotions . The story bounces from the past and present but it flows so easily you will not get lost at all . The characters are well written and the story line is well thought out . There were a couple of things that made me think what were the real plans to kill the scourge or kill the wardens by other wardens .  Over all I really enjoyed this story and I did get invested in the characters . This would be a great story for adults and older YA teenagers .  If you enjoy fantasy this will be the book for you . Check it out and settle down for a good read this winter season.
Posted by BOOKS TO CURL UP WITH at 7:30 AM