Good morning all , and it is hump day and a glorious hump day it is . Today I have a brand new series for you from my favourite  authors J.R Rain and Hp Mallory. Lets go to the north and meet THE VIKING WOLF . 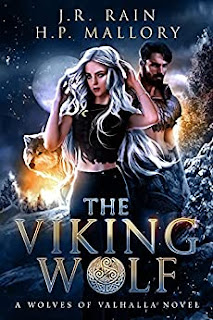 For as long as I can remember, I’ve known things I have no way of knowing—it’s almost like getting little whispers from the future, little hints about what’s going to happen...

When I receive an email from an unknown sender about a little town called Marshall Heights, I can’t seem to shake the feeling that I’m meant to move there.
Fast forward a few weeks and I find myself starting over in this postage-sized town. And when I happen to see him loading groceries into an old truck, I’m shocked speechless.
I’ve been in love with Torsten Black ever since he left me with no explanation eight years ago. Not a day has gone by that I haven’t thought of him. So, to see him here, now, in this Podunk town… it has to be fate.
But, Torsten isn’t as happily surprised to see me. Instead, he appears to be haunted by his past—a past full of secrets and lies. Torsten insists he’s not the same man he used to be.
He also insists that I’m not safe in Marshall Heights—something which becomes abundantly clear when Torsten’s brother, Skarde, a full-blown Viking warrior come from another realm, suddenly shows up in my apartment and tries to murder me.
Realizing I’m not the witch he thinks I am, Skarde releases me and then demands I join his cause—a cause I know and want nothing to do with.
Even if Skarde is just as gorgeous as his brother, he’s a loose cannon. Whereas Torsten is dark and brooding, Skarde is cocky and demanding. The two can’t stand each other and, at this point, I’m starting to agree with them both.
Regardless, now I’m not only involved in something I don’t understand, I’m in over my head.
In over my head = Viking wolf shifters, jealous and vengeful goddesses, and the start of the first of three winters which will doom mankind.
Learning I possess the blood of the Valkyrie (from Odin) as well as the blood of the witches (from Freya), I’m straddling the line between both pantheons of gods.
Stuck in the eye of the storm, I have no idea how to get out…
MY REVIEW
When Jovi decides to head to Marshall Heights for a new job . Things just seem to be different . When she sees the man that she has feelings for loading groceries . Torsten is happy to see her at all. He doesn't seem like the same man that he use to be . He is haunted by the past and is the shadow of what he was .  When something happens and the truth comes out will Jovi come out of this alive and will her heart be intact .
This is a really well written story, I adore the characters , they are well written and complex . Jovi is a sweet woman who just wants to live her life . She has a spark about her and when push comes to shove she will defend herself . She is complex and sometimes she comes off as a scared rabbit but she has the heart of a warrior . Torsten is a man haunted by what has happened and what is going to happen.  He is tall and sexy and wow you want to climb him like a spider monkey. There is more to him then meets the eye also, he is a shifter . Then we get to meet Skrade , now he is a Nordic god all tall sexy and oh so alpha . He is a warrior through and through. You love to hate him .
This story is the first in the series and I like the way the authors have set it up. The story has it all its paranormal and a good dose of Norse mythology . The characters are well written and complex .  I sat down and read this book in an evening . I was hooked by the end of the first chapter . I totally thought it was a good read and I truly loved the characters. It is a fast fun read that will keep you entertained . I can't wait to see where the authors take the characters . So if you want a good summer read check it out . You will like it .
Posted by BOOKS TO CURL UP WITH at 7:56 AM