Good Friday all , today we are going to review two books by Stephen Zimmer .

HEART OF THE LION( Dark Sun Dawn book one ) 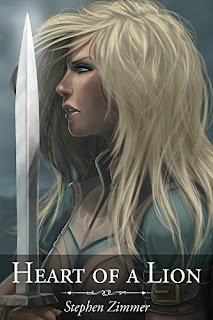 Rayden Valkyrie. She walks alone, serving no king, emperor, or master. Forged in the fires of tragedy, she has no place she truly calls home.

A deadly warrior wielding both blade and axe, Rayden is the bane of the wicked and corrupt. To many others, she is the most loyal and dedicated of friends, an ally who is unyielding in the most dangerous of circumstances.

The people of the far southern lands she has just aided claim that she has the heart of a lion. For Rayden, a long journey to the lands of the far northern tribes who adopted her as a child beckons, with an ocean lying in between.

Her path will lead her once more into the center of a maelstrom, one involving a rising empire that is said to be making use of the darkest kinds of sorcery to grow its power. Making new friends and discoveries amid tremendous peril, Rayden makes her way to the north.

Monstrous beasts, supernatural powers, and the bloody specter of war have been a part of her world for a long time and this journey will be no different. Rayden chooses the battles that she will fight, whether she takes up the cause of one individual or an entire people.

Both friends and enemies alike will swiftly learn that the people of the far southern lands spoke truly. Rayden Valkyrie has the heart of a lion.

Heart of a Lion is Book One of the Dark Sun Dawn Trilogy.

MY REVIEW
I must say I was captivated with this book . I have always had a thing for fantasy world and I absolutely love a strong kick ass heroine . Rayden is that character for me , she is strong . and fearless . She is a rebel that bows to no king and she with her band of best friend will prove that the southern land whispers that Rayden is the true heart of the lion .
The characters are so well written and so complex . Rayden is such a power house . She is strong and fearless and has an unapologetic strength to stick to her morals . She has a very strong sense of right and wrong  which works well for her in her battles. Not only does she have these values and morals , she keeps everyone in her band adhering to them . It is so great to see such a strong well written character . She makes me want to become a warrior .
This book had be hooked by the third page. The author takes us on such a great adventure ride . You honestly feel like you are right beside Rayden when she is in her battles . The author has a way of taking you right into the battle and are right beside her as she fights for what is right . This is a book that once you start reading you just can't put it down. You get sucked right in . You will cheer and you will shed a tear . You will fall in love with all the characters . this is a book for all the fantasy lovers out there . Check it out . 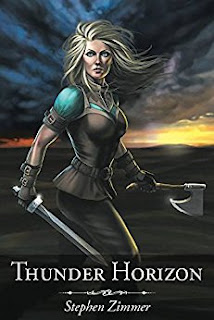 A deadly menace stalks the shadows of the lands to the north, stirring the winds of war. Farther south, the power of the Teveren Empire spreads with every passing day, empowered by dark sorcery. Formidable legions bent on conquest are on the march, slavery and subjugation following in their wake.

Within the rising maelstrom, Rayden Valkyrie has returned to the Gessa, to stand with the tribe that once took her into their care as a child. No amount of jewels or coin can sway her, nor can the great power of her adversaries intimidate her.

With a sword blade in her right hand and axe in her left, Rayden confronts foes both supernatural and of flesh and blood. Horrific revelations and tremendous risks loom; some that will see Rayden's survival in the gravest of peril.

Even if Rayden and the Gessa survive the trials plaguing their lands, the thunder of an even darker storm booms across the far horizon.

Thunder Horizon is the second book in the Dark Sun Dawn Saga.

In the second book we find Rayden fighting an evil of the darkest variety . She stands with the people that took her in as a child to help save them from the evil that is taking over .
Stephen takes us on an epic journey in book two . The evil is darker and the fights are harder . Rayden give he all to everyone and just reminds me why I love her so much. She is even more bad ass in this book . She had me on the edge of my seat all the way through this book . I loved every page .
This story is more epic then the first one . The author takes us on a ride that will keep you on the edge of your seat all the way through . At one point I was really wondering if this was it for Rayden and the Gessa . But like all the other battles she does come out of it . This story is a little bit more fast paced then the first one . You will absolutely love the story and the characters . Can't wait for the next book