Good Thursday all , hope your week is going great . Wow this is the last week of August where did the summer go . If you were like me I hope you soaked up the sun and read some really good books . Today we are going to review GOODBYE GOOD GIRL  by Renee Blossom 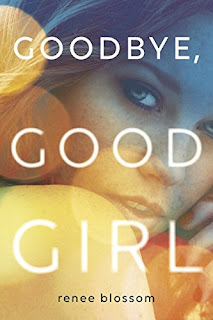 When eighteen year old Kandace Santellan is ditched in St. Louis by her boyfriend on a cross country trip to reach her estranged father, she finds herself trapped––she can’t go home and she doesn’t have enough money to reach Los Angeles. She then meets April, an ambitious exotic dancer with attitude, who has a one thousand dollar wager––that Kandace can make the money she desperately needs dancing at the gentleman’s club The Palace in just one night. Rumored as an adult playground of fast money and faster pills, it’s a place where fantasy is king and problems are forgotten. Anything can happen.
But can Kandace strip her clothes for money, even if it is her only way to repair her broken family?
Feeling like time is running out, and out of options, she gets curious…thinking that after one wild night dancing, she would be on her way to LA. And her friends and family would never need to know. Could she make it work? Or will the club’s fantasy lifestyle take the good girl from Pittsburgh, and make her into someone she’s never met?

When I sat down to read this book I was at a bit of a quandary . Was this a coming of age book a mystery or and adventure read . Meet Kandace a girl who is up against it with mounting medical bills from her moms accident . Younger sisters that she has to take care of . A missing dad that hasn't been home in over two years .  When she has the opportunity to find her dad she takes it . But when she is abandoned by her so called boyfriend she is at her wits end . With a chance meeting with April , she enters a world where money is good and the lifestyle is fast . Will she get to LA will her family find out .
The characters in the book are well written but some of the characters came off as being one dimensional . Kandace is the lead character and sometimes you kind of want to slap her and sometimes you want to hug her and tell her that things will be ok . I felt that she was very naïve through out the book . She really didn't have doubts about her new job of dancing and stripping .  April is the friend everyone warns you about . She is there and leading you into some situations that are hysterical but also a little dangerous . She has no filter and will tell you what's what on any occasion . She is such a hoot to read  and you will giggle with some of the things that come out of her mouth . At least I did .
This is an intriguing book, you are taking on a journey of self discovery and coming of age . Throw in a little mystery and adventure and you have this book . I kind of felt that the beginning of the book is a bit slow and I wanted the road trip to start sooner . The conversations dragged on and on at the beginning which to me slowed down the build up . When they finally got on the road the book started to pick up steam .  Also I would of liked to see a bit more of the nagging feeling that she shouldn't be stripping instead of jumping right into it and having fun and laughing . Needed to see a bit more nervousness .
Over all I really did enjoy this book and would recommend it to anyone who wants a good coming of age story mixed with mystery and adventure