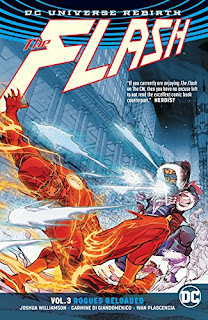 It’s the long-awaited throw-down with the most colorful Rogues Gallery in comics, from the acclaimed creative team of Joshua Williamson and Carmine Di Giandomenico, in THE FLASH VOL. 3: ROGUES RELOADED!

The moment the Flash starts investigating their disappearance, their plan clicks into place. It’s a deadly cat-and-mouse game that will have the Fastest Man Alive on the run across the globe—and close to home. Is the Scarlet Speedster fast enough to stop five diabolical crimes?

Even if he is, can he and Wally West—Kid Flash—survive the secrets they uncover about Wally’s father, the Reverse-Flash, and the last man to see him alive…Rogue veteran turned Suicide Squad recruit Captain Boomerang?

I have been a fan of the Flash for a long time now and I was excited to get my hands on this set In Rogues Reloaded , the rogues are part time allies or enemies which ever  time of day it is. This time they are in the need of help from the Flash when they steal from the wrong people .  He must help them before its too late .
The author really goes in depth on the Barry and Iris story line . We get to see more of them and their interactions . Along with the story of Wally and Barry and Wally's father . The stories are well written and I love the interaction with the character. You get more of an feeling for Barry and the gang . There are so many great characters to mention in this volume . We have an appearance of captain boomerang from the suicide squad helping out Wally . They are all well written and developed . k
The art work is rich and full of colour and beautifully done . The author does the rebirth justice . As he takes us on a roller coaster ride . This is a must add to anyone who loves the D.C universe and love the Flash . I am glad I got to read this one its is a definite add to my D.C collection . So if you want a good fun read for this long weekend check it out
Posted by BOOKS TO CURL UP WITH at 12:19 PM