Good morning all , I hope you all had a wonderful Christmas/ holiday season. I got a lot of reading done over the Christmas break . I read the new book by Dallas Mullican called THE DARK AGE . A Marlow Gentry thriller (book 2) 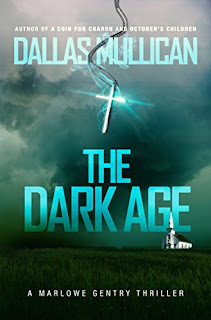 "MY GOD, MY GOD, WHY HAVE YOU FORSAKEN ME?" - Matthew 27:46The Heretic knows they lied.Now, he will make them confess.The first murder, a small town pastor burned at the stake, seems personal, an act of rage committed on impulse. But when a second victim is found brutally tortured to death, Detective Marlowe Gentry realizes he's dealing with a serial killer who is drawing inspiration from the Inquisition.
The killer's methods grow more gruesome with each victim. He's escalating, racing toward an endgame. How far will The Heretic go to punish those who betrayed him? And can Marlowe stop him before the ultimate trial?

This is the second book in the Marlow Gentry series and starts out a few months after the first book ended . There is a new serial killer out there and there is also an old threat coming back to haunt Marlowe .  The new serial killer is out to kill those that have wronged him and using ideas from the inquisition . The other threat is from an old enemy who thinks that Marlowe killed his son and is wanting to terrorize Marlowe, Becca and Paige .  I like that along with the Marlowe story Spence gets his story line in the book also . His story coincides with the murders of the heretic. As they race to catch the man before the end game is played .
Man I couldn't put this book down , I really liked the characters and the story line . The characters actually grew from the first book. They become more complex and developed . There is really no evil and good in them . There are shades of evil in each of them even the good guys . Marlowe is really at the tipping point , he is struggling with Becca feeling like they are falling apart and then with the case .  Spence happens to be one of my favourite characters , he is tough as nails but has such a soft spot and we get to watch him fall in love with his ex in spite of all the heinous acts going on around him and trying to find his brother .  Evan is truly not an evil villain . He is a man that has everything taken away from him and lost his faith . It doesn't help that he is a little off kilter and had a bad childhood .  You will love and hate each and everyone of these characters .
The author takes us on a rollercoaster ride through out this book. One min you are laughing the next minute you are on the edge of your seat . The way the author writes paints a picture when you read . It feels like you are right there in the room with the poor people being tortured . You want to help them but you can't . The author must of done a lot of research on torture in the inquisition because some of those torture scenes made me squirm uncomfortably. I will let you read them for yourself . There are a couple of good ones in there . Trust me on this one people when you start to read this book you won't put it down until you are done . You will get lost in the pages and when you are done you will have shed some tears and also cheered that the good guys triumph yet again . I hope that the author keeps this series going with other books. I truly love this series . So if you want a really good series that will keep you up all night reading . Check out the Marlowe Gentry series .