Well this week is going fast its already the middle of the week . Woohoo , today I have a zombie book for you .  DECAYING DAYS (The Decaying Days trilogy book 1) by Rachael Boucker 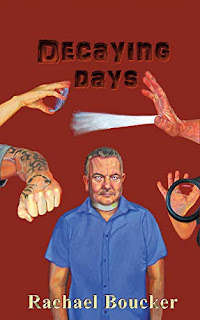 White-eyed monsters clean the streets and man production lines, with collars clasped around their necks to keep them compliant, to keep them docile. Such rage cannot be caged forever, but can it be cured?

Kronic hopes it can. His life has been put on hold while he cares for his collared girlfriend.
Luke sees the end coming. Working as a vigilante zombie slayer for hire, he saves and stockpiles and waits.
Every part of Sadie's fragmented mind loves her children, they keep her three selves together, but how will she protect them when control is lost for good?

With an explosion of newly afflicted and whispers of strange mutations, those who survive may never be human again.

Welcome to the end of the world, where they have collared and have the zombies cleaning streets and working in warehouses.   But like everything there is rage and can that rage be contained . Three different people are on the verge . Kronic prays it will be over cause he has been on hold for how long taking care of his collared girlfriend . Sadie's children keep her sane and all three of her personalities together and how long will that last . Luke senses the world is ending as he is killing zombies for hire . As he stockpiles and waits for the eventual ending of the world . Will there be a cure and will they survive .

The characters in this story are well written . They are all going through different things that keep them moving forward . Each character has their own story line through out this story. The most interesting of the three is Kronics he has such great insight into what is happening through out the book . Sadie i feel has the hardest time through out her story line . She is only holding on by a thread sometimes and her kids keep her on the sane side of life. Luke wants to kill as many as he can before the end comes . He is such a fun guy to read . You will like him  and his logic

This is a book where you sit down and start to read and then you can't put it down . The characters are well written and each chapter unravels the story of each character . I will admit that the start of the book was a little slow but you will soon get into the meat of the story and each characters story lines . They entwine and over lap at points which really makes the story even more plausable and likable . If you like zombies , you will like this new take on them .  I like this story  and can't wait to see what happens in book two . Over all this is an enjoyable story and the characters are great . So if you like zombies check out the new strain of the scary flesh eaters .
Posted by BOOKS TO CURL UP WITH at 7:40 AM