Good Wednesday all today I have the seventh book in the Lily Harper series by H,P Mallory. THE DEVIL IN DISGUISE . 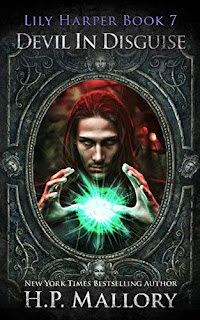 When Lily finds herself reunited with Tallis and Bill after her last harrowing escape from The Underground City, she'd like to think things are finally getting back to normal.

But, things are far from getting back to normal. And in this episode of the Lily Harper Series, Lily will find herself:

in danger of being sent to Shade for one hundred years
still the subject of Alaire's fascination and now he's more determined than ever before to make her yield to his entreaties
returned to the Underground City, and more pointedly the seventh circle, where she'll have to survive amidst the battling Blood Plains
and last, but not least, there's a new character in town--the Minotaur who just happens to spark something within Lily she doesn't understand.

DEVIL IN DISGUISE is the seventh book in the bestselling Lily Harper Series.

MY REVIEW
After making it back to Tallis and Bill and the underground city . Lily is waiting to find out if she still has a job . She is back but she is also in the seventh circle . Where she is going to find herself but she might end up loosing in the end .

I absolutely love these characters . Lily is growing stronger and is rolling with the punches she is getting handed.  She is level headed and will take on whatever is thrown at her. Tallis is back brooding and sexy as ever . He has Lily's back as they head through the blood plains . Bill has to be my favourite character. He is such a hoot and some of the things he says will have you rolling on the floor . I have never laughed so hard then I did with Bill . We also get to meet a new character Asterion a minotaur . Who has an attraction to Lily but we don't know what is behind that attraction . He is also a big brooding man/ bull . Who will love or hate depending on the moment in the book .

This book is one that you can sit down and read in an evening . The characters are very well written and complex . I love the interaction that Lily has with Asterion its one of my favourite part . Oh don't worry Tallis is still my main man . I mean who wouldn't want a brooding Scotsman around . Even after 7 books the author can keep the stories fresh and the characters growing with each book. You will get carried away to the seventh circle and have a hilarious time while you are there . Trust me the stuff Bill says will have you rolling on the floor . So if you want a fun filled story that will have you laughing so hard . Check it out . This series is just getting better and better with each story .
Posted by BOOKS TO CURL UP WITH at 8:16 AM