Good Wednesday all , I hope you are all doing good . I have rolling thunder storms coming on in today . So it is  great day to read . So I read the third book in the Mists of Magic and Mayhem book . HALLOWED FLAMES  by Hp Mallory 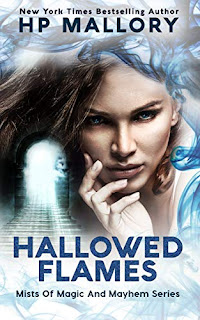 Welcome to the sexy world of magic and mayhem—of witches, vampires, fae and lycanthropes.
This episodic, monthly fantasy romance series features all the characters you know and love from the New York Times Bestselling Jolie Wilkins series.

Sinjin Sinclair now has a mission--to ensure Bryn is safe. But he'll have to worry about his own safety when his ships get attacked by the Vryloka...
Meanwhile, Emma finds herself the object of a ghostly attack...
After losing more of his men, Pagan makes a decision to the shock of his second in command--to seek out the rebel forces leader, Nyx, in the hopes of joining forces.
And why does High Mage Duine continue to receive haunting dreams of a woman with golden hair who makes him feel... whole and happy again?
Find out what happens in the third episode of the Mists of Magic and Mayhem Series!

MY REVIEW
Welcome back to the party , in this episode Sinjin is back and he is a man on a mission . He is on his way to make sure his wife and the mother of his daughter is safe. But first he has to make sure he is safe and the people on his boats are safe from the dreaded Vryloka . Then there is poor Emma who is unfortunately the object of a few ghostly attacks . \
Duine is having dreams of a mystery woman who can make him feel alive again .  Pagan is loosing men to Duine and so he must make a deal with the Rebel Nyx and her forces .

Ok now this is the third book in the series and all I can say is wow these characters are just getting better and better . Sinjin is back and bigger and badder then ever . He is such a god character . I love him when he is kick butt and all in protective mode . Duine is still a mystery to me we know he is Rand and has had all the love ripped out of him . As Duine he is all encompassing and has a mean streak a mile wide . We know deep down that he is a nice guy but right now you really just want to smack him upside the head .  These characters are so well written and you will love them and hate a few of them at the same time .

Well I was so happy to hear that book three was out . I got it and read the whole thing in one sitting . I must say I love when Sinjin is kicking butt and being all arrogant like he always was . HE IS BACK  and badder then ever . I am so happy that the author spent a book on the men of the series . They needed to come out and play for a bit . I really have trouble with the new Rand or Duine , he is just so arrogant and you really want to hit him with a frying pan . I know the author had to take this character in the direction he is going but i really hope that he will get his happy ending sometime . The author has written a fun filled episode in this series .  This is a series that you can read in a weekend and enjoy by the pool or at the beach . Check it out .
Posted by BOOKS TO CURL UP WITH at 1:56 PM