Good morning peeps , well it is a long weekend here in Canada and yes we are having all the seasons in one weekend . Had snow fall last night but it didn't stick so it will be a great weekend to read . So I have the second book in the Here to There series . THE FARAWAY CROWN by Hp |Mallory and J.R Rain . 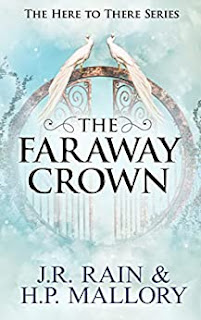 Elle Takra, the heir to a throne in a far-off place known as the Second Land, finds her life in upheaval when she’s whisked away to this foreign fantasy land.

After being attacked by those who would see her killed, Elle is rescued by a handsome fellow First Lander named Patch.

Even though Patch awakens within Elle romantic feelings she doesn’t understand, she’s still promised to her intended, Simon, who became separated from her in the attack.

And Elle is determined to find him.

Unluckily for both Elle and Patch, they soon find themselves playing captive yet again, this time in a far stranger way…

Meanwhile, Elle’s best friend, Sasha, an elf and Elle’s protector, is hot on Elle’s trail and she’s partnered with Doyle, the best swordsman in the land.

Elle is going to need all the help she can get because there’s a new assassin on her trail—the infamous Spyder—a man even the most skilled henchmen fear.

Can Sasha and Doyle find Elle and Patch before it’s too late?

MY REVIEW
After being attacked by people who really want her dead Elle is rescued by a dashing First lander named Patch . They are on the run trying to find their friends . When they are captured again but for nefarious reasons . They are put on display and watched while they go about their day in the lavish room they are put in , While their friends are fighting their own battle to get to Elle. Sasha teams up with Doyle one of the best swordsmen in all of the land . Will they get to Elle before the best assassin in the land finds her and murders her .
The characters are vast and varied . Elle is the typical damsel in distress who is just wanting the man she is betrothed to to find her .  I really tried to like her but she just comes off as a naive sometimes whiny girl who needs to grow a back bone . Sasha is well she is one kick butt character she is the warrior that will do anything to get back to Elle.  She is determined and single minded in what she needs to do .  Patch is to me like a swashbuckler who is mysterious and you really want to find out more about him . There are so many characters that come and go that are all well written .
This is the second book in the series and started where the first book left off .  The authors  really paint a picture of these lands and the people in them . There is so much that is going on you will have a fun time reading . I will admit i did struggle at the beginning of this book . Elle and I just didn't get along I just couldn't really enjoy her at the start but as I read the book I really got sucked in by chapter 4 . The characters are well written and the authors are taking them on such a fun journey . This is a series that is such a fun fantasy series for those young people in your life . So check it out
Posted by BOOKS TO CURL UP WITH at 8:03 AM