good Monday every one

Good Monday morning all , hope you all had a great weekend. Today we are reviewing STAY  by Emily Goodwin 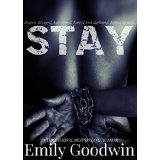 **Trigger Warning: This book is dark. It contains rape, abuse, sexual assault, violence, and strong language. This book is not suitable for readers easily offended by realistic tellings of human trafficking, those that do not wish to read about hard topics, or readers under the age of 18. If you want a feel-good, sexy read, this is NOT the book for you. Stay does not fit neatly into one genre. It’s part erotica, part dark romance, and part suspense thriller. It is a dark, gritty, and harrowing tale about finding love in the darkest of places. Read at your own risk. **

"I felt like I was walking to the end of a plank precariously hanging over shark-infested water. When I jumped, sharp teeth would rip into me and the cold water would steal my breath away. The monsters would take everything from me, leaving me shivering and naked in the water. The only difference was that tonight I would be pulled from the icy darkness and forced to do it again. There would be no release from death, only pain.”

Home after her first year of college, Adeline Miller is looking forward to a stress free summer filled with reading, working on her blog, and spending time with friends. But all that changes in an instant when she is witness to something terrible, something she wasn't supposed to see.

Adeline Miller is ripped from her innocent and carefree life and thrust into darkness, into a world full of pain and horror. As a sex slave, she is forced to do horrible things, and have horrible things done to her. One of her captors has a past as dark as the world she is now living in. Will getting close to him mean freedom? Or will he pull her deeper into the shadows?

MY REVIEW
I have be mulling over this review for awhile . I bought this book and was so excited to read it . It was suppose to be up there with the likes of Pepper Winters and Pam Godwin. So the fan girl in me went woooohooooo.
The author takes into the world of human trafficking and the sex slave underworld . Where an innocent woman . Addie is kidnapped for just being in the wrong place at the wrong time. She is taken and beaten . Then is put to work as a sex slave , used in so many different ways . She becomes close to Jackson, another captive . But will there closeness be the end of the or will they escape .
The characters in this book are vast and range from Addie , the girl who wants to fight back and wants to get out . She doesn't stop trying to escape . To the other girls that have come to realize that they are stuck and not going anywhere. Jackson is the soft but strong guy that becomes the rock that Addie needed and wanted . Zane was one of the bad guys but to me he just wasn't evil enough, there were times where I felt he just wasn't in to it . I honestly thought that Zane would turn around and end up doing the right thing and rescue everyone . Over all the characters were written well and complex .
This is the first book I have read from this author. Over it was a good raw story. The characters were all broken and you wanted to help them out. You wanted to scream and save everyone. The author started out well as I read the story . It started to fall away , I felt that I read this story somewhere before. The characters started to sound to similar to others that I have read . They almost just felt like they were there to fill the story and some of them really didn't do anything . I honestly tried to really like this story, but I just couldn't really get into it . The story line was good and the first part kept me turning pages . About half way through the book it just well fell away . There were still some good creepy scenes but the rest seemed like filler .  I was happy that it wasn't a cliff hanger and the main characters did get their HEA.