Good Monday all , hope you all had a great weekend . Today we are going to review PITFALL by Cameron Bane 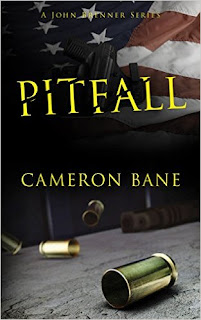 “I just added a new name to my short list of 'must-read' authors: Cameron Bane. 'Pitfall,' his just-released thriller, is chock-full of the action, gunplay, and well-crafted storytelling I love. And the star of this page-turner—former Army Ranger John Brenner—well, let’s just say in terms of skill, wit, and ability to kick some serious butt, Jack Reacher better watch out! Not for the faint-hearted, but definitely for those whose hearts pump hot for shoot-‘em-up adventures like 'Taken' and 'John Wick,' make 'Pitfall' your next read. It’s that good." —Robert Liparulo, bestselling author of COMES A HORSEMAN, GERM and the DREAMHOUSE KINGS series.

Life has never been easy for former Army Ranger John Brenner. The wounded Iraqi war vet and ex-cop must rely on his wits, his fists, and a wry sense of gallows humor to make it through each challenging day. For at his core, this transplanted West Virginian is a throwback to an antebellum time: he is a southern man of honor.

But his latest mission may be his last.

The task seems straightforward—find industrialist Jacob Cahill’s missing teenage daughter Sarah and bring her safely home. But for John Brenner, nothing ever goes quite as planned. In searching for the girl he will discover a new and unimaginable corruption hiding beneath a corporate façade … and come face to face with a ruthless killer known to his victims only by a macabre appellation: Boneless Chuck.

What begins as a simple disappearance morphs into something far more insidious as John finds himself plunged into a horrifying world of organ harvesting, torture, mutilation, and madness. Every dark trick John learned in his former trade of dealing death to the deserving will be brought to bear as he tries to keep his promise of bringing the girl back alive. In doing so, not only will his skills be tested to the breaking point, but his very sanity as he battles a grasping evil that stretches across the globe.

But darkness has met its match. Because sometimes it takes a man who’s spent quality time in the realms of the damned … to send someone else there. So strap down and hang on.

John Brenner has just been dropped into hell.

MY REVIEW
I started reading this book at the drs. office and got so entranced in the book , that I almost missed my name being called . I so got sucked into pages from the first chapter. Let me introduce you to Jack Brenner a retired army ranger and ex cop. He has had a very hard life and most of all he is a southern gentleman . He takes a case that was suppose to be easy but when is anything ever easy . He is confronted with an evil that reaches high and face to face with a ruthless killer named BONELESS CHUCK . Will he survive.
The characters in this book are well developed and very complex. The character of Jack is such a complex character . He is an retired army ranger who is also damaged but he is also very damaged. He works hard and has the sense to get things done . I really like his character and the way he gets things done . The bad guys in the book are evil and I mean really evil. They really do a number on our man.
This book had be me twisting in the wind most of the time , I was so engrossed . I was nervous and screaming at my computer most of the time . I was totally blown away . The writing is very good and the story flows so well. There is a little bit of a lag when Jack is hunting the killer down . But it doesn't take away from any of the story at all. This is a great book for a book hangover, and trust me you will be reading long into the night. The only thing was that not all the bad guys get caught . So here is hoping there is a book two for Jack and the gang . So if you want a good story with lots of intrigue and mystery