Good Friday everyone , I know todays blog is a little late but after power outages and surges I am back. Today we are going to review GIRL IN THE MAZE by R.K JACKSON 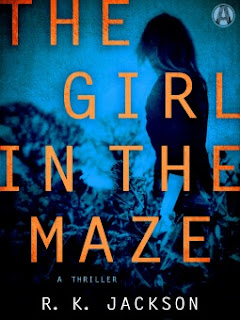 Perfect for fans of Gillian Flynn, Paula Hawkins, and Tana French, R. K. Jackson's lyrical, twisty psychological thriller debut follows an aspiring journalist as she uncovers dark truths in a seaswept Southern town—aided by a mysterious outcast and pursued by a ruthless killer.

When Martha Covington moves to Amberleen, Georgia, after her release from a psychiatric ward, she thinks her breakdown is behind her. A small town with a rich history, Amberleen feels like a fresh start. Taking a summer internship with the local historical society, Martha is tasked with gathering the stories of the Geechee residents of nearby Shell Heap Island, the descendants of slaves who have lived by their own traditions for the last three hundred years.

As Martha delves into her work, the voices she thought she left behind start whispering again, and she begins to doubt her recovery. When a grisly murder occurs, Martha finds herself at the center of a perfect storm—and she's the perfect suspect. Without a soul to vouch for her innocence or her sanity, Martha disappears into the wilderness, battling the pull of madness and struggling to piece together a supernatural puzzle of age-old resentments, broken promises, and cold-blooded murder. She finds an unexpected ally in a handsome young man fighting his own battles. With his help, Martha journeys through a terrifying labyrinth—to find the truth and clear her name, if she can survive to tell the tale.


MY REVIEW
When I started this book I wasn't really sure what I was getting myself into. The first couple of chapters had me wondering. But as I started to read I started to fall in love with the characters and the story line Let me introduce you to Martha Covington, a poor woman that has just been released from a psychiatric hospital. Now that she is cured she heads Amberleen Georgia to work on a history book about the rich history of the city and surrounding area. But alas she gets pulled into a mystery and she starts to hear voices . Now she has to figure out who the murderer is while she fights her own demons
This is the author's debut novel and she has created some very strong characters . Martha is both strong yet venerable at the same time . She has  battled Schizophrenia and come out with meds . But she isn't have a miracle cure . She lives with her disease every day. The author didn't give her a miracle cure . Which was actually great to read , too many characters end up all cured . She worked with the disease and made a great story out of it. There a great mixture of supporting characters from the old lady in the shop that is more then just a potion's lady . To the greedy land developers. You don't really know who are the bad guys and the good guys through out the book .
The author takes great care handling all aspects of the story. She has created such and intriguing story. Full of suspense and maybe a giggle or two. She has wrapped the history of the city with a story of greedy land developer. The story is nicely written and it flows well. For a debut author she did a very good job. The characters are well written along with the story line . You will end up with a book hang over as you delve into this story . You will giggle and you will shed a tear or two , but over all you will cheer for the characters.