Good Wednesday morning all . I hope you all are having a great day. Today we are going to review
STORIES THAT SHOULD NOT BE TOLD by Charles Riffle. 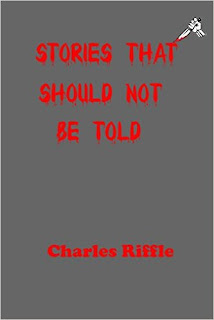 A collection of horror/suspense short stories with a twist of comedy. A young man travels to the past (with the help of a magical trucker's cap) in an attempt to save his slain girlfriend, Are you prepared for the Stink Bug Apocalypse?, A bumbling but competent FBI Agent tracks a serial killer with the help of an eccentric informant, A supernatural expert recalls his ghost hunting days with a pair of odd brothers and other stories of horror and absurdity.

MY REVIEW
This was such a fun book for me to read . I love horror books but this book had horror and comedy.
The first story had me laughing out loud because I had a bug problem at on time. It made me think back and laugh.
The first story THE INFESTATION , you all know you hate them the stink bugs that invade areas every year. The characters in this story are just ordinary everyday citizens .  It shows how one man's hysteria can take on a life of its own . Just get a few people to follow and you can get Armageddon . It is a very well written story that will make you giggle in some parts cause we have all been there with bugs .
The second story KAIJU GAS, Has a giant monster roaming in Vermont. A couple arguing in their car as they are driving home . Arguing about farting I presume , it had me giggling cause all couple argue about stupid thing. They aren't paying attention either . Come on you all have been there
The third story GARY'S DAY OFF . Is about a guy that doesn't like his job but is working long hours cause he likes the people . On his day off he has the worst day of his life. He ends up demon hunting at the old folks home . Gary is one pissed off LPN .
The third story SPECIAL AGENT RICHARD PETERS in the Case of the FRUGAL KILLER. Is the story of a serial killer and the FBI agent that is chasing him. But it has a twist . Richard Peters is an agent that is constantly being harassed by his partners , he is sent out to catch the frugal killer  This one takes you on a run around and in the arms of serial killers. Its a take off on Hansel and Gretal as he ends up on a butcher block . Won't tell you anymore but just imagine what is going on.
The fourth story THE FAN . Is about a young man kidnapped and is going to die . But all he can talk about is paying his cell bill. He just doesn't get the fact that he is about to die. He becomes a fan and drives the killer crazy by asking tons of questions. I laughed so hard reading this one story , cause you can just picture the killer shaking his head while his prey drove him crazy.
The fifth book THE BROTHERS BEEF , This short is about three guys that go ghost hunting . The way they go about it is pretty funny . Donnie doesn't know what he is getting into . He thinks he going to clean pools. Reading this story reminds of GHOSTBUSTERS and how they go about it . It was a great story to read and I loved it .
The sixth story in the book is THE TIME DUSTIN WENT BACK IN TIME . It is about 2 best friends who are there for each other . Goblin is a geek and Dustin is grieving for his murdered girl friend. Goblin is trying to pull Dustin out of his grief but not doing a good job.  One day Dustin gets a time traveling truckers hat . Where he travels back to help his girlfriend and that is where chaos ensues. I feel sorry for what poor Dustin has to go through while he is trying to get back home .I giggled at some scenes
The last story is ALEKZANDER VON THIRTENBURG.  Let me introduce you to Alekzander the best vampire that ever lived . In his opinion that is. He has survived the stake and the holy water . He decides to take a trip to America. Where he can't believe the fashion and getting assaulted And the poor vampire's day get even worse. I felt so sorry for poor Alekzander . I laughed and laughed .
Over all I really liked these stories . They are well written and flow very easily . The characters remind me of people that I know . Especially in the infestation . I had a blast reading this book . I was finished it in an evening . I laughed and had a great time reading . So if you want a great horror book with an element of comedy mixed in. This is a great book if you love to laugh with your horror.