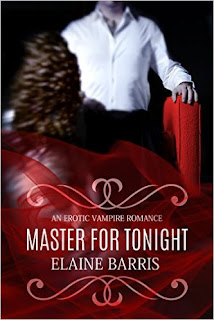 ***This book is intended for an audience 18 years or older***

While feeding in the slums of the city, he is interrupted by a woman. Mesmerized, he extracts his fangs from his meal and follows her home. Instantly obsessed, he watches her nightly. Nights turn to months. His desire for her becomes overwhelming. Though fearing the wrath of a vicious Maker who turned him against his will, Julian decides to give Kate the most sensual night of her life, and then walk away.

Kate Collins is an average woman in her late-30’s, plagued by panic attacks. Sent home by her boss at the shelter, she prepares to have a night of relaxation…until her doorbell rings.

Julian Montfort is the most beautiful and masculine man she has ever seen. He exudes ‘maleness’ from his entire body—that certain quality some men have in their DNA that makes a woman recognize her femininity…her ‘womanness.’ That part of her that is soft, malleable, and made to accept him. Drawn to him despite his unconventional arrival, Kate must answer his question: “Can you allow yourself this indulgence? It’s just one night.”

Deeply sensual, Master for Tonight is a contemporary vampire romance which goes beyond the burning physical attraction between Julian and Kate, telling a tale of two people drawn together under incomprehensible circumstances, and their fight to be together against all odds.

MY REVIEW
I started this book in the morning and I couldn't put it down. This is the first book I have read by this author and I was blown away . Let me introduce you to Julian and Kate .  Julian is a vampire who is drawn to Kate a beautiful yet lonely human. He knows that she is the one for him but his maker will never let him go. So he decides to have her for just one night . Bring her out of her shell and make her happy, But things are more then they seem and will they survive to let their love bloom
The characters in this debut novel  are very well written, Julian is a very tortured old soul. He just wants is to have peace and happiness . He is very dark and as sexy as hell . He is sex on a stick. Any girl would love to give one night to him . Kate is a character that has had it bad in her life and been hurt a lot.  She was kind of annoying at the beginning but as I read more she became more likable. My favorite character has to be Mazzie she is kick ass and doesn't let anyone or anything get in her way. She is no nonsense and has helped Kate through a lot. I loved her ballsy attitude . She was fun to read
For this being a debut novel the author really set the stage and made her characters stand out. The twists and turns will keep you reading. This hands up is a dark vampire erotica and trust me your kindle will want to melt while reading the night with Julian and Kate . Be prepared for some pantie melting going on. I will tell you one thing though. There is a cliff hanger and I mean a big cliff hanger . So buy both books and just keep reading. So when you read this book I suggest a nice cold drink and a fan cause its going to get hot. Ps this book will give you a book hang over also. So if you want a good dark vampire erotica , with twists and turns check it out . You won't be disappointed