Omg I am so excited to be reviewing this book today .  She is one of my favorite authors and I think I have read everything she has written . So I am proud to be review BLOOD OF EVE by Pam Godwin 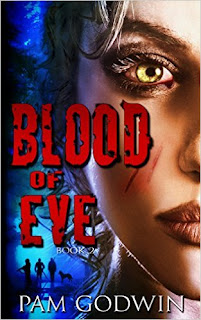 Two years into the aphid plague, there’s little hope left. Food and ammo are scarce. The mutated monsters are growing faster, smarter. And the ratio of men to women is millions to one. Mankind faces imminent extinction. 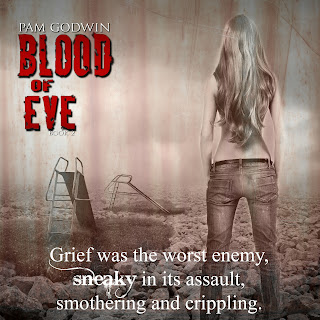 MY REVIEW
BLOOD OF EVE  is the continuation of Eve's story, as she and her guardians fight their way through a post apocalyptic world full of aphids and men that will do anything to have their way with the last living woman on the earth.  They find out that Eve's blood will cure the female nymphs and change them back to human . So they go on the hunt to find the nymphs . They fight their way across America but its not only the Aphids they are fighting . They are fighting marauders, wild animals and sometimes even each other . Old friends say good by and new friends are made as they  know what they have to do and find the Drone and killing him and heal the women. But will they survive and keep the prophecy from happening.
Eve is one of the best female characters I have read in awhile . She is strong and kicks ass with the best of them. She has been through hell and back and is still standing . She doesn't let the three men in her life push her around . Even though they are her guardians and love her, they also respect her . They help her as her powers increase and she gets more powers. Each guardian is there to help her in any way he can . There is Jesse Beckett , the hot Lakota dream walker.  He is tall gorgeous and brooding . He love Eve and wants her but is denying himself because of the prophecy. He is the strong silent type. Michio is the doctor of the group and there is more to him then we know at the beginning . He knows a lot about the virus and he chose to protect her instead of siding with the drone in the first book.   And last but not least the third guardian is Father Roark, an irish priest who is the comic of the group . He is absolutely the sweetest guy and he is my favorite out of all of them. He also puts Eve in her place all the time . You just want to hug him when you see him struggling with his faith and his love for Eve and the guys .  He is always the first to crack a joke to ease the tension. He was also the first man Eve met other then the Lakota men.  The rest of the cast are new people they meet and become part of the group. They all fit in seamlessly and become really good friends and allies as they fight the war.
I had just finished book one and the chance to read book two came up and I was hooked. I started reading book two and was gobsmacked . I couldn't put it down . I took it to bed with me and read way into the night . The characters as so well written and the story moved at such a fast pace . I couldn't get enough . Oh and the sex its surpasses what Pam has written before . There are some scenes that would melt your kindle. Had me a little flushed at certain times. There is also a lot of action and some great comic relief among the pages also. The story is so well crafted that you don't mind that it is over 600 pages . You will get sucked in and laugh, cry and scream at your kindle . I did have an ugly cry at the end of the book , I was heart broken , wishing it would of turned out different. This book will give you a book hangover and you will be thinking of these characters for a long time after you are done . So check out the book  you wont be disappointed

RIGHT NOW BLOOD OF EVE IS ONLY 99 cents  FOR THIS WEEK ONLY , SO DON'T MISS YOUR CHANCE http://www.amazon.com/Blood-Eve-Trilogy-Book-ebook/dp/B017AL87Z6/ref=cm_cr_pr_product_top?ie=UTF8
Posted by BOOKS TO CURL UP WITH at 9:30 AM