Welcome to Wednesday, today we are going to review a book that actually scared me so let me introduce to SCABS The Gemini Exception by Eric A Shelman. 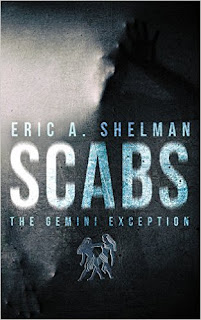 A strange phenomenon occurs out of nowhere. An omnipresent light that engulfs the entire planet. Humanity is forever changed by the light. NOAA and NASA are mystified.

People soon face a new threat; even the smallest, most insignificant injury will no longer heal. Doctors cannot stop it. The sick do not die … they change.

As the survivors flee, it becomes clear there is no place to run and time is short. The topography of the planet begins to change. Devastation and destruction ensue on a massive scale.

Scott and Warren Walsh are brothers. Over a thousand miles separate them from one another. Something about them is special, and places them in a category with only 0.2% of the world’s population.

Only one thing gives Scott, Warren and others like them hope against the Scabs.

MY REVIEW
This book had me looking over my shoulder for about three days and really wanting to be a twin. I will admit it I actually slept with the light on after I finished. Yes I admit it I was so creeped out and I loved it . This is the first book in a long time that actually made me uneasy. Which in my book is and awesome read. The author has taken us on such a terror filled ride, you will be turning pages all night long.
The story is based on Warren and Scott Walsh, brothers that were separated when they were young . One moving across the border to Canada and the other moving to Florida.  Not speaking very much through out the years as the circumstances are so vast. As the world starts to change with the light and the scabs . They decide that they have to get to the remote cabin where they grew up. Communicating through homing pigeons and spotty cell service. They have to navigate the government, the hazards on the road and the creatures. Which one is worse I just don't know .
The characters are well written and well developed . You get to feel the pain and anger from both men as they travel to the cabin. They have both been through a lot one more then the other. But both Scott and Warren have been hurt in so many different ways . You see them come to terms with what has happened as they reunite at the Cabin. The rest of the cast of characters are a rag tag bunch that are all twins or triplets . They come from all walks of life and some are very flawed but sweet and others are stronger and want to do anything they can to get away. The one thing is that they compliment each other in so many ways. They become a family as they fight to survive. I really like these characters very much.
The author takes us on a rollercoaster ride from the very first pages.  The author writes alternating stories so you feel like you are there with the brothers as they head out and fight the creatures, which we don't really know what they are but they are creepy and evolving with every turn of the page.  This isn't a book for the faint of heart , trust me on this one . I slept with the light on for 2 nights after reading. and jumping at every noise you hear outside. So if you want a book that combines both zombies and horror , this is the book for you. You won't be able to put it down . Just remember to sleep with the lights on.