Good Friday all . Today we are going to review Naima Simone's new boo SCORING WITH THE WRONG TWIN . 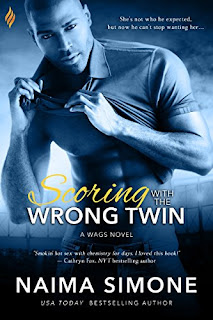 Shy, awkward Sophia Cruz has a hard time telling her vivacious identical twin “no.” But when her sister begs her to swap places for a modeling shoot, she caves … again. Then Zephirin Black walks onto the set. The brooding, aloof, and gorgeous tight end for the Washington Warriors. But she can keep it professional… She has to. Because the adorkable Cruz twin has no luck with guys once they compare her to her sister.
After a bad break-up, Zeph hasn’t been big on second chances—and even less with trust. But he finds himself giving please-call-me-by-my-middle-name-Sophia both. The woman he’d dismissed as a spoiled cover model is different from the first time he met her. Quirkier. Funnier. Definitely sexier. What started as one night turns into another…and another…and another…
Still, Sophia can’t go on keeping her secret from him. But telling Zeph the truth will mean losing him for good.

WOW is the first word that comes to mind when you sit down and read . This is a hot sexy read . That will keep you reading until the wee hours of the morning . When Sophia's twin sister gets double booked for a modeling shoot . She convinces Sophia to take her place .  Well when she does she meets Zeph and wow the sparks fly . But will the second chance be given especially when the person is not the person he thought she was . Will love survive .
I fell in love with Zeph and Sophia . They are such a hot, fun couple. Zeph is oh so hot and just oozes sex but there are moments you kind of want to slap him upside the head . He is well just he is a man who needs a good woman . He has some big trust issues and so wants to trust but can't .  He is flawed but you fall in love with him anyway. Sophia is such a sweet girl . She thinks that she just isn't a beautiful as her twin sister Giovanna . She is the nerdy , geeky sister . So when she decides to do it you see her struggle with the fact that she is as beautiful as her sister . And yes I did want to shake her a few times because her and Zeph belonged together .
The book took me on such an emotional journey , I couldn't put the book down . The relationship between the two and the lies kind of drove me crazy . I was waiting for someone to blow her cover or Giovanna to show up somewhere . It broke my heart every time Sophia had to lie to Zeph . It took them the longest time to realize that they belonged together . They drug me along for the ride . Trust me I wanted them together so badly . With every good love story you know there will be strife and misunderstandings before their happily every after . This book just proves that nerdy girls and football hunks belong together . So if you want a good hot read for this winter check it out.