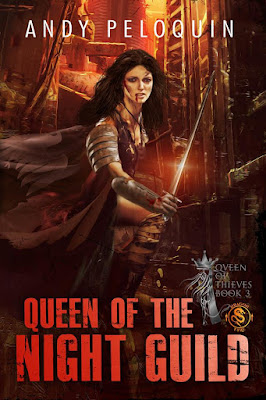 Ruthless criminals are made, not born. Queen of Thieves—an insight into the transformation from innocent child to thief and killer willing to do anything to save the ones she loves.


"I am Ilanna, Journeyman of House Hawk... and vengeance will be mine."
Ilanna has lost everything: her friends, her home, her family, her dreams of freedom.
All that remains is a burning desire to find the bastards who burned down her city and tried to kill her.
But a traitor hides among the ranks of the Night Guild, poisoning her friends and allies with lies.
Cast out and condemned to death, Ilanna has no choice but to turn to old enemies to save not only her life, but her Guild and city in the process.
Read the breathtaking, heart-stopping conclusion to the Queen of Thieves series!
Fans of Sarah J. Maas and Scott Lynch will love Queen of Thieves…

Ilanna's hand darted to her sword. The pain of her scorched flesh didn't stop her from drawing the blade.
"Wait!" Master Gold's voice cracked like a whip. "Follow me."
He scurried from the Guild Council Chamber. Ilanna fell in step behind him, her eyes wary. Chaos reigned in the Night Guild. From all around, cries, shouts, and the clash of steel echoed off the earthen walls of the tunnels. Men hurried to and fro, directionless, uncertain where the threat came from.
Yet Master Gold led them away from the tumult.


Ilanna jerked to a stop. "What?" Fury burned in her chest. "We're under attack, and your first thought is for your own skin?"


"Think about it, Ilanna." The words poured from his mouth in a rush. "I am Master of the Night Guild. What will happen to the Guild if I am killed, or worse, captured?"


"But we don't know who's attacking us!" Ilanna half-turned toward the sound of fighting. "We have to find out more."


Master Gold gripped her arm. "Does it really matter?" His jaw muscles worked. "Either the Duke's Arbitors have found our tunnels, or the Bloody Hand has. There's no heroism in dying today."


Ilanna clenched her fists. "Damn it, Master Gold! We have to help." The clash of steel and the cries of fighting men grew louder.


"No, we don’t." The Guild Master shook his head. "We need to be safe. House Serpent and House Bloodbear were formed for just this eventuality. They've enough fighters between them to drive out a small army."


"They're going to get killed!" Ilanna protested.


"And they've known that since the first day they were chosen by their Houses. Just as you knew what would happen if you were caught in the wrong mansion." He gripped her sword arm. "But I must live. If we are to recover from this, we will need a clear head and a firm hand to direct our next step. You know as well as I that there is no one better suited to leading the Guild in a time like this than me. If that means I must act the coward and hide, so be it. I do it for the Guild."


Ilanna looked in his eyes. His expression showed no sign of fear, only the cold pragmatism that had made him such a useful ally. He spoke the truth. That didn't mean she had to like it.


"Well," she snarled, "you may be comfortable running and hiding, but I stand with my House!"


"With those hands?" Master Gold's voice grew harsh. "You can barely hold that sword without wincing. You wouldn't last two minutes in a fight."


Ilanna wanted to argue, but the pain radiating through her scorched palms forestalled her argument.


"If you will not listen to reason," Master Gold snapped, "you will obey a direct command. Protect me, Journeyman Ilanna of House Hawk. Protect your Guild Master. That is an order." His eyes narrowed. "And before you protest, remember that you are still a Journeyman. You have not yet been released from the oaths you swore to your House, to the Guild. To me."


Ilanna growled low in her throat. "Damn you, Master Gold!" She had to heed his command.


"Let's go." Master Gold jerked his head down a side corridor. "To my office."


The Guild Council Chamber stood a few hundred paces from the Guild Master's quarters, on neutral territory belonging to none of the Houses. Master Gold and Ilanna covered the distance in less than a minute.


Ilanna threw the deadbolt. The door, built of solid Ghandian blackwood, would keep out anything short of a battering ram.


"Now what?" Her gaze darted around the room. If they dragged the Guild Master's enormous desk in front of the door, it could buy a few more minutes.


"Leave it," Master Gold waved her away from the heavy furniture. "This way." He strode over to a bookcase, upon which sat seven golden figurines: a hawk, a serpent, a scorpion, a bloodbear, a fox, a hound, and a grubber mole. The Guild Master pulled on the hawk. Mechanisms deep in the wall clicked, and the bookcase slid to one side, revealing a darkened tunnel beyond.


"Secrets within secrets, Ilanna." The Guild Master pointed to the alchemical lamp that hung on the opposite wall. "We'll need light."


Ilanna darted across the room and lifted the lamp from its sconce. Once inside the hidden passage, Master Gold pressed on a stone and the bookcase slid shut without a sound.


Ilanna held up the lamp. The tunnel ran for ten paces before turning a corner. "Where does this go?" she whispered.


"To the sewer tunnels beneath the city. And to the chambers of every House Master."


Ilanna's eyebrows shot up. "What?"


Master Gold grinned and shrugged. "There is much about the Night Guild known only to myself and the Masters I trust."


Relief flooded Ilanna. "So he'll be safe." Master Hawk could hide until the Serpents and Bloodbears dealt with the threat.


Master Gold's expression darkened. "You've known Jagar Khat for years." Sorrow filled his eyes. "Have you ever known him to back down when someone threatened his House?"


Ilanna's gut clenched. Master Hawk would be the first to face whatever came through the doors of the Aerie. He would protect his House, the cost be damned.


Master Gold's hand gripped her shoulder. "You can't go out there. You can't save him."


Ilanna whirled. "Damn you, Master Gold!" She drove a fist into the earthen walls.


The Guild Master's voice dropped to a whisper. "He'll survive this. He has to." He spoke as if trying to convince himself.


Andy Peloquin: Lover of All Things Dark and Mysterious
I am, first and foremost, a storyteller and an artist--words are my palette. Fantasy is my genre of choice, and I love to explore the darker side of human nature through the filter of fantasy heroes, villains, and everything in between. I'm also a freelance writer, a book lover, and a guy who just loves to meet new people and spend hours talking about my fascination for the worlds I encounter in the pages of fantasy novels.

Fantasy provides us with an escape, a way to forget about our mundane problems and step into worlds where anything is possible. It transcends age, gender, religion, race, or lifestyle--it is our way of believing what cannot be, delving into the unknowable, and discovering hidden truths about ourselves and our world in a brand new way. Fiction at its very best!