Good Monday morning all today I have for you a novella by Linda Thomas - Sundstrom .  DARK WOLF . 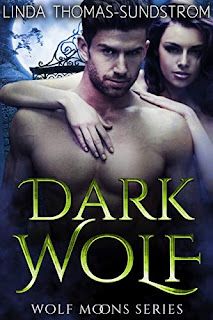 Carson Randall's world was full of secrets. What were hers?

Her name was Ranada, which meat "reborn," and she was kept prisoner behind the iron gates of her family's estate... for her own good, everyone said.
Carson, the alpha of his own wolf pack, was hired to protect her from afar.
But under a full moon... some of Ranada's secrets might become too unbelievable, and way too alluring, to keep Carson from her. Is Ranada Price a wolf, like him, or something he has never seen before? What will he do when she asks for his help?
MY REVIEW
Randa is a prisoner behind iron gates but this isn't a prison in a sense but the the family's estate . Everyone says its for her own good  and she needs to stay put until the day she is married off . Carson is hired to guard her but from afar. He is the alpha of his wolf pack and has secrets that he is hiding from Randa until the night of the full moon , when things change for the both of them . The attraction is hot and they can't deny it . But will they realize the truth of what is about to happen to them .
Randa and Carson are such well written and complex . Randa is an old soul who is feisty and such a strong woman . She doesn't want to be married off to a stranger . She is truly a strong woman. Carson he is strong and oh so sexy , he is and alpha through and through. He takes taking care of what is his . Together they are such an intense couple . You know you want them together and aren't disappointed .
This is a short story that you can read in an evening . The author packs a lot of hot and steamy into a small book . The characters are well written and complex . You will cheer for the main characters . The story takes place all on one night and you will love the way the author takes us on a ride.  I am going to stop here cause I don't want to let any spoilers slip . So if you want a sexy werewolf book check it out . A great fall read .
Posted by BOOKS TO CURL UP WITH at 9:45 AM