Good morning all today I have a new series for you , its is co written by two of my favourite authors .J.R Rain and Hp Mallory . NEITHER HYDE NOR HAIR ( Lucy Westerna book one ) 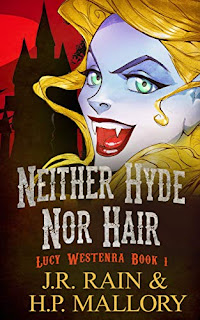 My name is Lucy Westenra. And I hunt monsters.

You might remember me—I was one of the first unfortunates turned by Dracula.
Well, the count might think he turned me, but I was saved by witch magic. Owing to an elixir created by high witch, Lissa Ravenwood, I’m mostly humam... as long as I take the elixir every three days.
But the vampire within me is always there in the background, threatening to turn me into a creature I detest. The count, Vlad, wants exactly that—for me to succumb to my darker side and return to him. He considers me his fledgling, his love, his creation.
I consider him a royal pain in my backside.
Regardless, I still need Vlad. Well, I need his help on a particularly difficult case...
Because I’m in control of my vampire side, and I’m stronger and faster than your average human, I work as a bounty hunter, specializing in apprehending things that go bump in the night. I guess it takes a monster to catch a monster.
And the case I’m on now is giving me apoplexy...
Students at Lissa’s witch academy are falling ill—clearly under the effects of Hyde, an illegal street drug. When another young woman’s mutilated body is found in an alley, I realize we’ve got a murderer on the loose. And I have a feeling the two cases are tied… I’m just not sure how or why.
As if that isn’t stress-inducing enough, the vampire council is in town, and that means I need Vlad’s protection. What I don’t need is his constant amorous attempts...
Sigh. It’s just another day in the unlife of Lucy Westenra, a girl who hunts monsters and hasn’t had a date in over a decade...
MY REVIEW
Welcome to my life , Lucy Westerna . I am a girl who is stuck between two worlds . I hunt monsters in the dark but I am also one of those monsters .  There is one monster I can't shake and that man is Vlad . He is my sire and my worst enemy and the man I can't live without . When students at Lissa's witch academy start getting sick from an illegal street drug . It is up to me and Vlad to find Hyde and put him down . If that was hard enough the vampire council is in town . Will I be able to find Hyde and stop him and also stop the unwanted advances from Vlad . What is a girl to do
The characters are ones that you will love . Lucy is a very strong character , she is feisty and also torn between her two halves . I really liked her , she can fight but also be a lady and can be sweet if she wants to be . Vlad is back and he is as dashingly handsome as ever . He is a cad in every sense . He is so much fun to read . Lucy and Vlad are such a great couple even when she is trying to keep him at arms length.
This is a fun read ,  its quirky and full of fun and tense times . I love the writing styles of both these authors they can take you on a fun filled ride that will have you laughing and on the edge of your seat at the same time . The characters they created are complex and well written , you know you just want to be friends with them . I love the twist they have on the Dracula story and what happened to Lucy afterwards . The only thing that stopped me from going five stars is that I felt that it was a little lagging in a few areas . Over all I really enjoyed this first book in  the series . I really can't wait to see where these two talented authors take the characters and the story . This is a great book to add to your fall reading list you will not be disappointed at all . Check it out
Posted by BOOKS TO CURL UP WITH at 9:04 AM