Good morning all , hope you are all staying warm and safe as the storms roll through. Today I have another brand new series for you from two of my all time favourite authors . J.R Rain and Hp Mallory and their new book THE MERMAID NEXT DOOR . 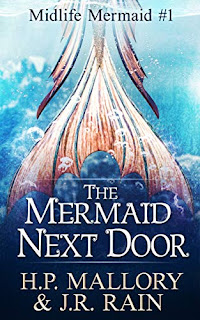 Being a mermaid isn’t all it’s cracked up to be...

In the underwater kingdom of Corsica, mermaids are the property of mermen. We’re considered valuable as breeders until we reach our mid-thirties, at which time we’re deemed no longer useful.
Good thing for me I’m forty, never had any children and I’m a widow. So, I can basically live my life as I see fit.
Until my husband’s younger brother, Cullen, decides to make me his wife… one of seven.
Cullen has a mean streak a mile wide and he’s always been obsessed with me—ever since we were young. Now that his older brother is out of the way, he recognizes his chance to finally possess me.
Only I’m the type of woman who won’t accept my fate so easily. No, I’m a fighter by nature so when it’s decreed that I should marry Cullen, I do the only thing I can do.
I escape. To the land.
Once I reach the shore, I’m facing a whole new and terrifyingly unfamiliar world. Luckily I’ve got the Siren’s Song which encourages humans to do whatever I want them to.
Except my song doesn’t work on one human male in particular, Sawyer Ray.
And Sawyer just happens to be the one man I need, because I’m fairly certain someone has come after me…
MY REVIEW
Eva just wants to do what she wants after being widowed this mermaid just wants to do her own thing . Until the day her dead husbands brother decides that she will be his seventh wife . Eva wants nothing to do with Cullen's proposal so she must do some thing drastic and head to land . Where she meets a man who isn't affected by her siren song . Who might be the hero that she needs when Cullen comes to get her and try and take her back .
Ok, ok i know what you are thinking its another mermaid book , what can you do that hasn't been done before . Well lets say this is a mermaid that I think most of us can relate to. She is over forty , childless and a widow . Eva is stronger then she seems at the beginning of the book . She just wants to have her own life and doesn't want to be married again. Sawyer is a sweet guy who is funny and the type of guy you want as a friend and maybe more . Wendy is the best friend any girl or mermaid could want . She is funny and sweet and just wants to help Eva out and get her happy again. Cullen well he is such an arrogant man who just wants to have what his brother had . He is the type of man you want to slap over and over .
This is a well what can I say out of all the books I have read from these two authors . This one is really on the tame side . This is the first book in the series so there is a lot of set up . The characters are well written and I really want to see where they take them and make them more complex .  The story is fun , fast read that will have you giggling all the way through .  It will also have you thinking cause there are some underlying themes of being property to someone else and some issues of abuse. The authors really do a good job crafting the story to have you getting sucked in by the end of chapter one . So if you want a fun fast read in this cold snap . Check it out you won't be disappointed .
Posted by BOOKS TO CURL UP WITH at 7:22 AM