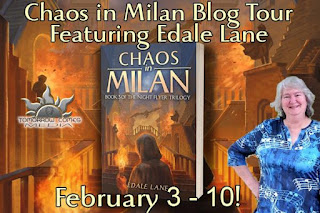 Book Synopsis for Chaos in Milan:

One woman stands between chaos and order – the Night Flyer.

When chaos strikes at the heart of Milan, it is up to Florentina’s alter-ego the Night Flyer to stop it. As Florentina and Madelena’s love deepens, so does the well of danger surrounding them. The race is on to discover the mysterious Shadow Guild and uncover who is behind the deadly rampage, but Florentina’s mission is threatened by a gang of assassins. Can the Night Flyer prevail, or will Maddie’s love be ripped from her arms?

Chaos in Milan is the third book in Edale Lane’s Night Flyer Trilogy, a tale of power, passion, and payback in Renaissance Italy. If you like action and suspense, rich historical background, three-dimensional characters, and a sweet romance, then you’ll want to complete the Night Flyer saga. 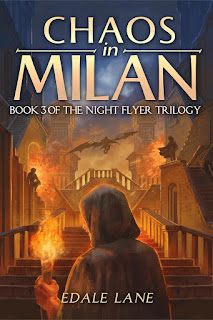 When a Plan Comes Together

Serendipity: when things work out wonderfully, seemingly by chance. There’s nothing like it, nothing to compare to that feeling when you discover you were on the right path all along, when divergent pieces of the puzzle just all magically fall into place. That is exactly what I experienced writing Chaos in Milan.

When I began the Night Flyer Trilogy over a year ago, I had the principal characters and the overall plotline planned, but not the details for books two and three. I had researched and chosen the year 1502-1503 to fulfill two major historical objectives: to be shortly after Leonardo da Vinci had left Milan and while one of the Italian wars was ongoing. I wanted to showcase art and cast Leonardo as Florentina’s mentor, so that time frame needed to fit, and I also desired to write an epic battle scene. Since I knew Antonio would join the army, I just required there to be a war somewhere on the peninsula. So I picked appropriate years.

Then I had planned for various secret societies to meet on astronomically significant dates—the solstices and equinoxes. Little did I know how advantageous these early choices would prove to be.

As I delved deeper into the facts of the Italian Wars, something amazing emerged. During my time frame, Milan was a possession of France who was fighting a war against Spain over which of them would control Naples. Both sides recruited locals into their armies, but engagements between the rivals were few and unremarkable—all except for one. After Merchants in Milan had been published and my path forward set, I discovered the Battle of Cerignola. As it happens, this battle fought on April 28, 1503, was a historic event which changed the face of warfare forever. Although I was unaware when I began the trilogy, I had the opportunity to include the first battle in history in which handheld firearms determined the outcome, and the first general to be killed with a handgun in combat. The French outnumbered the Spanish by at least two to one, and yet they fell in huge numbers in less than an hour as they were cut down by the Spanish arquebusiers (soldiers firing an early long rifle). The Duke of Nemours who led the French died from a wheel-lock pistol shot. The serendipitous moment occurred when I realized the date of this engagement fit perfectly in the timeline of my plot. Pennies from Heaven (well, more like colossal sums of Florins).

When mapping out the books of the trilogy, I had planned Merchants of Milan to show the reader some Renaissance art of Milan, Secrets of Milan to showcase Rome, and Chaos in Milan to take our heroes to Florence. But when I started on the third book, I had no idea what simply marvelous little-known fact would be revealed. As police officers frown upon semi-truck-drivers to be scrolling about performing investigations on their phones while driving down the highway, I asked my partner and research assistant, Johanna White, to look up what famous art was available to see in June 1503. Everyone knows that Michelangelo’s David did not go on display until 1504, so I needed to find other art for my characters to view while supposing they could run into the young sculptor on the street, as he was living in Florence at the time. Then fortune struck! Johanna, digging deeper than Wikipedia, came across a scholarly article based on records kept by the Opera of the Florence Cathedral (the board that oversaw the church). The article described an earlier unveiling of the famed statue that actually occurred before it went on display to the public, on—get this—the day of the summer solstice, 1503! In honor of St. John’s Day, Florence’s patron saint, the church requested to see the David as Michelangelo was just making his final polishes, and my characters were in the city to see it! I can vividly recall my excitement while Johanna read me the article as I was driving along, bouncing in my seat with elation, squealing in delight. The reason it took another seven months to go on public display was that originally the David was supposed to go over the entrance to the Florence Cathedral, but when the priests and city officials saw it, they declared it must be seen at ground level so everyone could observe the fabulous detail. Which leads to a third serendipitous moment; they set up a committee to decide where to place the statue, a committee which included a very famous individual who (unbeknownst to me when I began the book) was also in Florence on that day. Who you ask? Well, read Chaos in Milan and find out!

There’s nothing like that feeling when the stars all align for you, at least there isn’t for me. Oh, the joy that filled my soul as the details of the last book of the Night Flyer Trilogy all came together so perfectly. Sure, I could just make stuff up, but for a historian this was like mana from Heaven. I’ve had critics with their surface knowledge of the past write, “that wasn’t possible then, that’s not what happened, they couldn’t do that,” etc., but I don’t write it and call it historical fiction unless I’ve done my research. I just wanted all of you to know the true story behind my story. 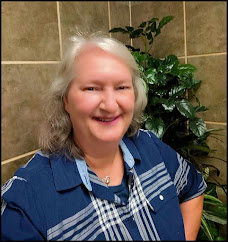 About the author:  Edale Lane is the author of an award winning 2019 debut novel, Heart of Sherwood. She is the alter-ego of author Melodie Romeo, (Vlad a Novel, Terror in Time, and others) who founded Past and Prologue Press. Both identities are qualified to write historical fiction by virtue of an MA in History and 24 years spent as a teacher, along with skill and dedication in regard to research. She is a successful author who also currently drives a tractor-trailer across the United States. A native of Vicksburg, MS, Edale (or Melodie as the case may be) is also a musician who loves animals, gardening, and nature. Please visit her website at:    https://pastandprologuepress.lpages.co/