I am back after my self imposed exile from reading after a big reader round up . My eyes were really sore lol . I can't wait for you guys to read the eleventh book in the Lily Harper series. FIRE DOWN BELOW 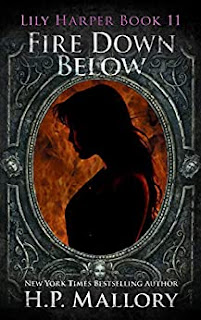 Lily’s life is about to change as she finds herself finally facing the moment when she’s able to love both men in her life, Tallis and Asterion. But, what happens in the aftermath of their tryst?

Meanwhile, there’s a war brewing between two factions in the Underground City: a group of gangsters, led by Frank Nitti and another group led by Eleanor of Aquitaine.
Both sides are warring for control and Lily finds herself in the clutches of one side, while Tallis is caught by the other.
Find out what happens in the 11th installment of the Lily Harper Series!
MY REVIEW
Lily and the gang are back and on their way to stop the war between the two factions in the Underground City . With Tallis on one side and Lily on the other side . They are also still coming to terms with what happened between Lily . Tallis and Asterion after they finally got together . Will they be able to come to terms with what has happened while trying to stop the ultimate fight that are occurring .
Ok here we go  I am going to say that book eleven has been the funniest book in the series . Lily is finally coming into her full powers and is stronger then ever . She is on one side of the fight and Tallis is on the other side . Tallis well he is fighting hard to not let what happened get in his mind. He is still the sexy Scotsman who will melt your heart and fight for those he loves Bill is off helping them fighting his own fight along side them . I truly love these characters and the way they have grown and become more complex with each book. We do get to meet some new characters and well they are gangsters and well Anne Franks makes an appearance to help everyone out .
This is such a fun read , the author takes us back to gangsters and gangland fights with tommy guns and classic gangster warfare . Lily is still the center of the story but it just becomes more fun as you read. The author  takes us on another epic adventure . The story seems to just have a life of its own. I will warn you the first chapter has an awesome sex scene in it so don't be put off . Just keep reading and enjoying Lily and the gang. I read this book in a day and couldn't put it down . So if you want a fun series to read check out the Lily Harper series .
Posted by BOOKS TO CURL UP WITH at 1:34 PM