Good day peeps hope your Monday is going well. Today I have the last book in the Artic Wolf series . Lets dive into  DARK WOLF  by Hp Mallory and J.R Rain. 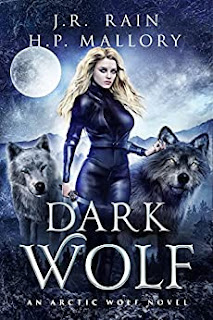 I just found out I’m mated to my wolf shifter boyfriend, Alex...

While that might not sound so bad—we can now read each other’s thoughts.

And maybe that doesn’t sound so bad either—except for the fact that I’m a very private person and the only person I want inside my head is me...

And, ahem…I also can’t seem to keep my eyes or mind off a certain bear shifter named Lucas, who just accosted Alex and me in the woods.

And these confusing feelings are the last thing I want Alex to know anything about!

Even though Lucas is a jerk, something about him seems to appeal to my inner wolf.

As if that weren’t a big enough issue, there’s also Lucas’s father, Harvey, his pack leader.

Harvey’s not only a drunk and an abuser, but I’m pretty sure he’s also guilty of murder.

So, now it’s up to me to prove that guilt and figure out what this attraction is that I can’t seem to get past regarding Lucas.

MY REVIEW
Welcome back to Alaska where the night are long and the shifters are hot . Elodie has now mated with Alex and its not that bad until they run into a bear shifter Lucas . Now what could go wrong but that dang pesky bear is attracted to Elodie's inner wolf . What is a girl to do except hunt for the bad guy and try and come to terms with her feelings .  Its all in a days work for the tough as nails a police captain .
Elodie and gang are back and better then ever . Elodie is feisty and kick butt she is also now a wolf . Which brings her a bunch more trouble . She can hear her mates voice now and well she can shift . She is so much fun . Alex is her mate and man he is strong and sexy and but still broody .They are so cute together and are meant for each other . There are so many other characters that are part of the book Lucas who is a bear shifter who turns Elodie's head . All the characters are well written and complex.
This is the last book in the series and I was kind of sad when I started reading . The story took me to Alaska right in the middle of winter . The authors really paint a picture of Alaska and what it is to live there . The characters are well written and complex and you will fall in love them . the authors really wrap up all the story lines quite nicely . I really loved this story and was sort of sad it is all over . So if you want a fun fast read check out this series .
Posted by BOOKS TO CURL UP WITH at 2:14 PM