Sorry I haven't been around for a few days , trying to get farm work done and battling the weather . Today we are going to review THE WIDOW'S SON A Rare Book Mystery by Thomas Shawver 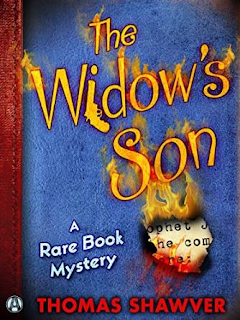 Sure to please fans of Lawrence Block, John Dunning, and Christopher Fowler, the new Rare Book Mystery plunges readers into a centuries-old struggle of blood, faith, family, and revenge.
In 1844, Joseph Smith, the Mormon prophet, died at the hands of an angry mob who stormed his jail cell in Carthage, Illinois. Shortly after, a radical faction of Smith’s followers swore to avenge Smith’s death by killing not only the four men deemed most responsible, but to teach their heirs to eliminate future generations of the prophet’s murderers as well.

One hundred and seventy years later, rare book dealer Michael Bevan is offered a valuable first-edition Book of Mormon that bears a strange inscription hinting at blood atonement. Within days of handing the book over for authentication, the volume disappears and two people lie dead. Michael soon learns that his friend Natalie Phelan, whose only crime is her genealogy, is the likely next victim. One of her would-be murderers has fallen in love with her, another is physically incapable of carrying out the act, but other avenging angels remain on the loose.

When Natalie is kidnapped, Michael must venture into a clandestine camp of vengeful men hell-bent on ritual sacrifice. To save her life, the book dealer needs all his worldly courage, brawn, and wits. But to defeat fanatics driven by an unholy vision, a little divine intervention couldn’t hurt.


MY REVIEW
This is the second book in the Rare book mysteries that I have read and I must say they never cease to amaze me . Michael  Bevan is back and this time he is offered a rare first edition OF THE BOOK OR MORMON. That has a very strange inscription in it . Within two days the book goes missing and people are dying. When Michael finds out that his friend is on the list of these bloody avengers, to schedule to die . He will do anything to protect her , even head into the lions den. This case a bunch of vengeful men who would are ready to do anything even ritual sacrifice . He is ready for anything and will stop them at any price . But will they both survive . You will have to read to find out .
Thomas has built some great characters with Michael and Natalie as the two best friends . Michael is that guy you want in your corner when push comes to shove . He is a book worm but a very sweet book worm. He will do anything to help out his best friend . Natalie is the girl next door that is sweet and good looking . She has one of her kidnappers fall in love with her. She falls in love with him back. Michael and Natalie are like brother and sister that would do almost anything for each other . The supporting cast is a nice cross section of good guys and bad guys . You are like wth some of the way through. You will definitely hate the bad guys and love the good guys. You will also giggle at some actions these characters do and some of the predicaments that they get themselves into.
The author takes us back to 1844 and lets us see the Joseph Smith  and the consequences and the repercussions of the select group of lets just say fanatics of the faith . And how those old ways come to play in today's  society . You will be taken for a ride especially at the end when everything comes to a head . There are twists and turns that will make you go hmmmm . Now why the heck did they do that. You actually will get invested in these characters and you will want them to live. Trust me I started this book in the early morning and had it read in one day . It really sucked you in and I couldn't put it down until I was finished . So if you want a interesting read for those long days at the lake . Put this book on your tbr list . Then be prepared to taken to the past and fight for the future .