Good Thursday all , today is my last post before vacation . Today we are going to review
KENTUCKY BLOODBATH  Ten Bizarre Tales of Murder from the Bluegrass State by Kevin Sullivan. 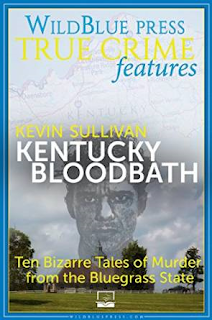 Think Kentucky is all about horses and mint juleps? You may revise that image with this excursion into the weird and the bizarre: from a medieval-esque murder in a small town museum to the jilted boyfriend who decided that his former girlfriend needed to die on her twenty-first birthday. And then there’s the demented son who returns home to live with his mother and stepfather, and one night in their beautiful mansion sitting atop a high bluff overlooking the Ohio River, slaughters them. Each case will keep you on the edge of your seat.

From The Author:As I began my research into past Kentucky killers and their victims, I was well aware there were a good number of very unusual homicides from the Bluegrass State, as I’d read about them over the years in newspapers accounts, heard the strange tales from relatives and friends, or watched the occasional newscasts on TV.

But these sources were never in-depth studies of the cases in question; and worse still, very often, erroneous information came forth, and it wasn’t until I began the research, using the original case files, that I’d find out what really happened. And it would be in these moments of discovery, that an accurate picture of each individual tragedy would rise and take shape from the seemingly innumerable police reports and interviews of those involved.

Indeed, many of these ten stories I’ve “unearthed” would have been lost forever had I not sought them out from the dusty archives and storage facilities scattered throughout the state; stories that would, ultimately, be destined for obscurity and eventual disposal as the decades dragged on.

Recently, one radio interviewer, contemplating their bizarre aspects, quite rightly stated how all of these Kentucky murders resembled something out of The Twilight Zone, and I quickly had to agree with his assessment. That’s the nature of these cases, and frankly, it was what I was looking for in my quest to uncover true crime in Kentucky.

From The Story "Blood In The Moonlight": “As Bauer led the officer to the side door where they entered the house through the kitchen, Kendrick asked if he knew who’d done this, and Bauer said, “No.” Just before stepping inside the home, Kendrick radioed the Emergency Medical Services unit, telling them to continue on to this address – code 3 – and that homicide units should be sent as well. Having notified dispatch, Kendrick then drew his weapon and entered a nightmare."

MY REVIEW
All I can say is where has this book been, I have been waiting for a true crime story has me flipping the pages all night long. This book is in fact 10 different true crime stories in it. All these stories have happened around Kentucky . There are cases of rape, murder. burglary and so much more . Each case is more and more insane as the last one . The author does a good comprehensive telling of each case but they are quick reads . You will just get over one case and dive right into the next case. Each chapter is a case in the book . There are crime scene photos for some of them. There are cases that make you cringed and say WTH.
The author has  straight forward style of writing that will suck you in and keep you turning pages . He has done very intense research for this book. He dove in with both feet so to say . He took stories that could be lost and brought them to light . He took us to the edge and back again. I was very impressed by this book . I read it in one evening . I will say don't read before bed cause if you have a mind like mine . I dreamt about the murders that night and honestly had to watch cartoons for an hour to settle my mind. Yes I know, I know . This is the first book I have read from this author and so happy I did . I am going to be looking for the rest of his books .  So if you want a great true crime book that tackles 10 different cases . That you can finish in an evening check him out . A great addition to your summer reading list.