Good Monday all, hope you all had a wonderful weekend full of reading and relaxing . Today we are going to review PLAYING FOR KEEPS ( A Neighbour From Hell book one ) by R.L Mathewson. 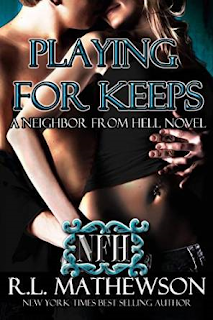 Done with being the world's biggest pushover, Haley decides that things are going to start changing. The first thing that she was going to do was to put a stop to all the crap that her aggravating neighbor put her through. What she hadn't expected was to be sucked into his world, but Haley has a game plan and she won't let herself forget what the bad boy next door is capable of.

The last thing that Jason expected was for his shy little neighbor to go Rambo on him over some ruined flowers, but he quickly got over it once he realized exactly what he'd been missing. After he decides to take her under his wing, he can't help but notice how nicely she fits in his life. Now the only thing left to do was to convince her that this is anything but a game.

*Author's Note:
There is no rape in any way, shape or form in this book. That is one thing that readers will never have to worry about reading in any of my books. Haley does in fact save herself for the right man and since that man is a Bradford, I'm sure that many readers would agree that she made an excellent decision ;)

MY REVIEW
This was the first book in this series . I found it while I was hunting for a new author to read . R.L Mathewson will be my new favorite author. Let me introduce you to Haley and Jason . Neighbours who also work together at the same private school. Their uneasy relationship started five years earlier when Haley caught Jason peeing on his oak tree and it went down hill from there. Through a lot of misunderstandings that really never were told to her , like broken windows and pain ball splats on sheets . Until the day that Haley went crazy when she caught him pulling up her prized tulips. She turns the hose on him and end up be locked in her house with him because of the yellow jacket nest they irritated .  Then things start to change and they become friends and they both are falling in love with each other but will not admit it to each other . Until the night where things go wrong and now they have to fight to get back what they have.
The author has some very interesting characters in this book . I fell in love with Jason , he is a guy that never had serious relationship. He doesn't want to let anyone in and he doesn't want to get hurt. He also as the affinity for food , well lets just say he is always hungry and loves Haley's cooking . His whole family is that way , they have been banned from buffets in Vegas and a few other places . I was laughing so hard when he was telling Haley about being banned . She just didn't understand .
He takes on the role of best friend, cuddle buddy and wing man to his neighbour and a sweet young woman. He wants to teach Haley how to be more assertive and just say no. Who knew that he was going to get gobsmacked and fall in love with her in the process . Yes he screws up big time and he wants to fix it . So he asks his father which is so sweet .
Haley is your shy girl next door, who is a push over when it comes to never saying no . She is a sweet and sexy geeky girl. She is afraid of her own shadow at the beginning of the book until the day Jason entered her life and gave her the strength to get a backbone and blossom . She has the family from hell and doesn't even like being around the snobbiness of the family. They treat her like she isn't good enough and that she needs a rich man to take care of her . But as she hangs out with Jason , she soon realizes that she doesn't need them to make her feel good about herself
Then like all great relationships we have the friends . The ones who aren't real happy that Miss Haley got a back bone . The guys are checking her out and her girlfriends are just trying to destroy her and bring her back to spineless old self, I love Mitch and Brad , Jason's best friends . They are constantly trying to steal Haley and more important they are always trying to steal the baked goods . Jason is constantly slapping their fingers and growling at them to leave Haley and her treats alone . they are his. I mean the way the author wrote those scenes had me laughing cause you could just picture yourself sitting there listening to these guys arguing over her cupcakes . And yes you can take that anyway you want .
This is a great summer read . It about a couple finding each other and in turn finding themselves and their true desires . You will laugh and I mean laugh hard. Grandma is a hoot. You will also shed a few tears. You will yell at Jason and Haley and then you will want to hug them and make them feel better. Trust me you will want to bitch slap the members of her family. When Jason screws up you will want to throttle his butt big time . You will be amazed on what lengths they will go to get each other back . And Jason's obsession of food is a story in its self and you will be laughing hard .
So grab this book for a great summer read . Its free on amazon also .
Posted by BOOKS TO CURL UP WITH at 3:12 PM