Good Friday everyone , its the start of the weekend . Hope you guys are stocking up on your summer reading books. I have one that needs to go on there . TRAGICALLY WICKED (Dark Angels of Valhalla book 1) by N.L Hoffmann 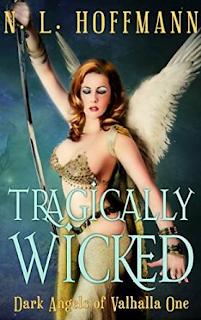 *A modern twist to the Valkyrie.*

"Imagine being human, then waking the next day to find you’re the Guardian Valkyrie, whose duty is to protect the souls of fallen warriors. One little catch… I have to find them first!"

Fallon Creed's life has been turned upside down and she must find the missing warrior souls before others with less than honorable intentions can get their hands on them. She not only has to face these new enemies, she also learns that someone close to her is not who she said she was.

With the aid of two powerful brothers, Fallon starts to embrace her role as the Guardian. When her strength as a Valkyrie is tested, she starts to have doubts as to whether she can live up to the job.

Time doesn't matter to those who are Immortal.....unless you're the Guardian. If Fallon doesn't find all the souls in time, it could mean the end of her existence as well as the rest of the world's.


MY REVIEW
I was excited to see that N.L has written a new series. This is a great new twist on the Valkyrie and Valhalla . Let me introduce you to Fallon Creed , and her world is about to be turned upside down and sideways. On her birthday she is about to work on one of the hottest men she has ever met . The next moment there are swords wielding and heads beginning chopped off . In between that she finds out that she is the daughter of Frejya and a Valkyrie. Even more she is a Guardian a very special type of Valkyrie.  She is thrust into a world that she never knew existed. A world of fae , vampires , Gods and Goddess's and immortals . Now with two hot men by her side and her best friend she must embrace the role of Guardian and collect the lost souls before its too late and there is nothing left.

In N.L fashion she puts her main character right in the middle of it and lets her earn  the powers that are coming to her. This book has not disappointed in that N.L drops Fallon right in the middle of it . As she learns what it means to be a Valkyrie. There is a steep learning curve .
I loved Fallon she is a no nonsense girl that has been on her own. She takes no shit from no one . Even her best friend . When she finally realizes what is happening, she takes the bulls by the horn, and dives right in. She does screw up and when she does , she owns it . She also has some very laughable moments . When she meets Alex her first lost soul, he is well lets just say a little brutish and naked .
Then there is Jake and Wes Mathews the two brothers sent to protect Fallon. They both are just dripping with alpha pheromones . They are both tall gorgeous and want Fallon. They will fight with her and keep her safe. But there are more to theses men then meets the eye. I won't tell you but trust me you will be gasping when you read .  There are both Greek and Celtic gods mixed in the pie and you are in for the ride of your life .

I got this book and when I opened it I knew I was going to go on a roller coaster ride. She never ceases to amaze me in her writing . Her stories are full of action and adventure , and romance . Her characters are complex and you will fall in love with them or kill them , your option. You will cheer for them, cry with them and get frustrated right along with them. You are pulled into a great story that will keep you reading long into the night . Yes this book gave me a big book hangover cause I wanted to see what would happen. So if you want to read a great twist on the Valkyrie . This is the book for you . If you like paranormal, humor and adventure this is the book for you . 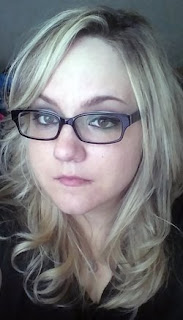 N.L Hoffmann is a paranormal romance author that just completed her first series called The Daughters of Darkness. Currently she has three books out, Blood Slaves, Shadow Cursed and Death Design.

In her pre-teens, she began writing and developed her love for literature. Finally, January 2014, she took the plunge by publishing Blood Slaves. The debut novel had been written three years prior to the release date.

Today, Hoffmann resides in Michigan with her husband and three children. When Hoffmann isn't busy putting words on the page she enjoys reading, drawing, playing pranks on her husband, and spending time with her family.