Good Thursday everyone , hope your week is going well and you are staying cool. Today we are going to review GAGE The Barringer Brothers series  by Tess Oliver 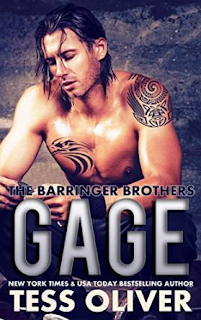 After nearly losing his friend in a logging accident, Gage Barringer is convinced now more than ever that he needs to find a different job. But his side business of breaking colts at the small Montana ranch he inherited from his grandfather doesn't earn him enough money. He has his mind set on running The Raven's Nest, a popular bar and restaurant near his ranch. The original owner has died and Gage is waiting for it to be put up for sale. But there is a five-foot-four, brown eyed, obstacle in his way, an obstacle with lips made for sin and a voice made for breaking hearts. And Summer Donovan is one road block Gage Barringer won't be able to find a way around.


MY REVIEW
Gage is the first book in the Barringer Brother series . This is the first book I have actually read by Tess Oliver.
Gage is a logger / rancher with a naughty streak that runs a mile long . The men don't really like him and the women want to get into his pants . He hasn't had  a serious relationship in forever . That changes the first moment he meets Summer Donavon , the new owner of the restaurant he was trying to buy. That's when the fire works start . Their first meeting was just after he broke the sink in the ladies room . While having  well just let your imagination wander. He was so arrogant and kind of angry at the beginning of the book. He is all alpha but does let his sweet side come through more and more .
Summer Donavon is a female character that has a back bone, she has had her share of heart break too. She was propositioned by the head of the record label and her boyfriend cheated on her on the same day . So  Gage is going to be no problem so she thought . As they keep running into each other and realize that they live five minutes from each other.  She tries to keep him at arms length but it gets harder and harder .
I really liked the story and the characters . They felt like real people with real problems . They are attracted to each other but don't want to get hurt .  There is a lot of sexual tension and flirting that goes on between the two of them . It is fun to watch. And the sex scenes well they are hot , hot , hot
There is just one little thing that I found very distracting was all the logging scenes , I wish the author would of toned that down just a bit, and kept up the banter between Gage and Summer going . That sexual tension was soo dam good. Another thing is it just ended we see them getting back together and it just stops , no epilogue or anything .
Over all I really liked this book, it was a fast read for me and I think you could read it in an afternoon. This would be a good addition to your summer reading list . You will be taken on a funfilled ride with lots of sexiness to go along with it .
Posted by BOOKS TO CURL UP WITH at 1:47 PM