HAPPY LAST DAY OF JUNE everyone. Today we are happy to review the newest book in the Enclave series. UNDYING HUNGER by Jessica Lee 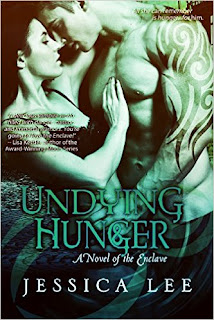 All she can remember is hunger...for him.
A year ago, Alexandria Stevens strode through the doors of Wicked Ways and into the arms of a man-a monster, really-who stole everything from her. Her memory. Her life. Now she's a creature of darkness with only hazy images in her mind of that night and a confusing jumble of emotions. A fierce hate...and an even fiercer desire for Markus Santini.
Markus has walked through this world for more than a hundred years, knowing exactly who and what he was, until Alexandria undid it all. Undid him. When a former vampire colleague threatens one of the Enclave's own, Markus is needed-but only as the dark, powerful creature he once was. And in order to become that, he must find redemption...in the arms of a woman who despises him with every breath she can no longer take.

MY REVIEW
I was so excited when I found out that Jessica was writing this installment . I always had a thing for bad boys and Markus Santini was the baddest of the boys of the Enclave. He finds himself in the cage in the basement of the Enclave , held prisoner because of his earlier actions. When he defected to the wrong side. As he aches for Alexandria the only one that haunts him even after he turned her and wiped her memories of what happened. Will he redeem himself in the Eyes of the one he loves and will he find his way back to what he was .
I absolutely love this series  and was so excited to find out Markus was getting his own story . He was the one that I really wanted to learn more about . He was the darkest of all of them and the most tortured . I loved him from the beginning even when he decided or lets say got sucked into the wrong side . You could tell that he was such a tortured soul.  He is tortured from what he did in his past and what he did to poor Alexandra. He did those things to protect her . There are times that you really want to climb him like a spider monkey , he oozes sex appeal and has that wicked little light that ever y girl wants .  He truly is the hero but also the antihero. You see him struggle with becoming the hero but in the end you will love him.
Alexandra is one tough cookie. She was held turned and had all her memories wiped . but she keeps on kissing ass. She wants to find out what happened to her and she also wants to become a full fledged member of the Enclave. She is determined and feisty and will do almost anything to find out about her lost memories . Even if that means taking on the one that took from her in the first place . She will go about it kicking and screaming if she has to. I pity poor Markus as she goes about finding out what happened to her. These two characters are such strong independent characters but when they are together the sparks fly and they become stronger together .
The rest of the crew is there also, with all of the hot men and there loves . They will kick some ass and help get rid of the evil. Kenric is the hot alpha of the group . Arran , and Guerin all the brooding sexy men that will have you panting after them and then wanting to slap them up side the head , well just cause they are men .
This is a great story of love and redemption. You will love to dive into the story . It can be read as a stand alone but it is better to read the whole series and meet all the men. The author takes us on a great ride . You will giggle and then you will want to throw your kindle. Just cause well you will understand when you read.
I adore this author and if this is the end of the men of the Enclave , that is ok . The men are back together and Markus is redeemed in my eyes . But if she decides that the boys have one more story to tell . I will be there to read and enjoy . So if you like paranormal romance this is the book for you . Add it to your summer reading list. I know you won't be disappointed in the least.