Woohoo its Friday , I am so looking forward to this weekend . Its been a very long week here on the ranch.  Today we are going to review a new author to me Lizzy Ford and her book SUPERVILLIANESS part one 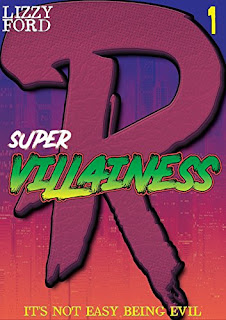 Sand City, a town in the Pacific Northwest, where the rents are too high and the rain never stops. On the surface, it appears normal – except this city is run by General Savage, an alleged supervillain.

Fleeing Chicago and the disastrous mistakes of his past, Doctor Kimber Wellington accepts a job at the only hospital willing to hire him. Grateful for a second chance, he ignores the city’s strange obsession with supervillains.

That is, until the daughter of General Savage nearly dies in his arms. Kimber couldn’t be any more different than Reader, the self-professed supervillainess-in-training, who insists she has superpowers that just so happen not to work around him. She’s deranged, violent, abrasive – and has never known kindness from anyone else.

Unfortunately, helping her places Kimber in the crosshairs of Reader’s arch-nemesis. Drawn to the part of her that’s good yet horrified by her dark, violent world, Kimber finds himself at a crossroads: stay in Sand City at the potential cost of his own life, or abandon the city, the people and the compelling supervillainess who need him.

MY REVIEW
Welcome to Sand City a city that looks normal on the outside . But there is an underside that is run by a seedy General Savage a supervillian . Enter doctor Kimber Wellington a doctor running from his past who saves the General's daughter from dying .  As he ends up on the cross hairs and becomes a reluctant superhero to save the city and himself from the likes of General Savage
I started reading this book and thought to myself wow what a great take on the superhero genre. It was a little quirky and weird but it was a great read. I could actually see this as a graphic novel instead of the novel. The story is well developed and the characters are complex and well developed.
Doctor Kimber Wellington is a flawed character, he is running from his past and is not wanting to be the superhero everyone wants him to be. He is totally an average guy who is thrown in to a horrible situation. He helps out the wrong person  Reader she is the daughter of General Savage and a super villain in the making . She is a riddle  she wants to be good but is conditioned to be bad by her father. Forced to be the villain that he wants to be . I think she is my favourite character in the book. She is strong but also weak in a few way which shows that she is a person not a machine . General Savage makes for a great evil character . He is sadistic and just pure evil and fun to read .
This was just a fun book to read . It didn't take itself too seriously and it didn't leave the reader going what the hell did I just read . The characters are well rounded and the author built a great world for them.  This book does the super hero genre good . When you read it you will love the world the author created.  This is a great book for the beach or those late nights by the campfire . You will be taken on a ride that will leave you laughing and crying . So if you want a different take on super heros check it out .