Good Monday morning all. Hope everyone is staying warm and finding some great reads . I have a new book SPELL HELL by N.L Hoffmann. 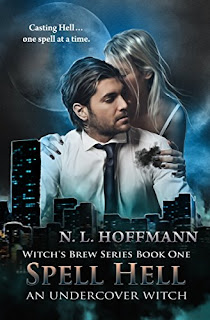 Casting Hell…one spell at a time.

Who knew that a single witch could have so many forces troubling her community? Everyone seems to get a case to work except Sophie Dexter, but when the Witches' Council finally assigns her one, it comes along with an egotistical, jerky vampire that seems to have it out for witches. At least, that’s what Sophie suspects.

Riverdale, Colorado is where it all begins. Witches go missing, and then are found...murdered. What do they all have in common, besides being dead? They were all hired-and subsequently fired-by the jerky vampire and powerful software magnate himself, Drake Jacobi.

Sophie must go undercover as one of Drake’s secretaries in order to discover what is really going on at his company. Will her arsenal of spells prevent her fate from becoming the same as the others before her? Or will her own destiny be even worse if she falls under the spell of the handsome vampire?
MY REVIEW
I have been following this author for awhile and was so excited to find out there was a new book coming out  Spell Hell is the first book in a new series.  Meet Sophie Dexter. she works for the witches council well she sits on the witches council . She hasn't gone on any missions yet  but she is working on it. She has so much going against her . She doesn't know why the head of the council is doing everything in her power to disgrace Sophie.  Going on her first assignment she is determined to get experience . Who knew she would fall for the handsome Drake Jacobi , software magnate  and vampire . Will they survive the person trying to kill Sophie . Will Sophie get a hold of her powers and will they survive each other .
I loved the characters in this book . Sophie is such a sweet character who is trying hard to fit in with the other witches . She is trying but not being successful, she is her own unique woman . She is a strong character but she needs to grow into her strength . She is tough but also really sensitive.. but there are some faults to her also. To me sometimes she seems very childlike and does some whining and she seems to blame everyone else but herself . But you do see her start to take responsibility for herself and her magic . Now Drake is well Drake is hot sexy and oh so vampire . He is bold and domineering and so damn sexy . You want to just climb him like a spider monkey and use him . He is a great character , he is just so hot . He is like the force of nature that will hit you like a ton of bricks . You will be swept of your feet .  The other characters are a mixture of good and evil and you really can't figure out who is the actual murderer until the very end and you will be oh so surprised.
This is a great start to a serious that I can see growing and with characters and great story lines .  I started reading and before I knew it I was done . I just flew through this one , I loved the characters an the story was good . The only thing I didn't like was sometimes the story was just a little tangled but it does work its way out . Over all I was really impressed with the story and the characters .The story line is good and I can't wait to see where the author takes them in the next books . So if you want a good story with  witches and hot sexy vampires . Check it out  I promise you will like this book .
Posted by BOOKS TO CURL UP WITH at 10:09 AM