Welcome to the demons

Well I have made it three days into January and today we are going to review a new book by Ricky Fleet . No it isn't a zombie book . This time our he decided to write about demons and evil older then time . Let me introduce you to INFERNAL , EMERGENCE 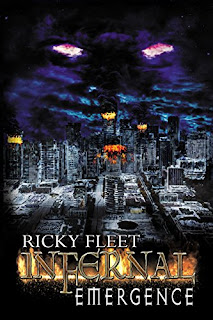 For centuries, the ground has been laid for an evil as old as time to take ascendancy over our realm. Promises of limitless power seduce the hearts and minds of the corrupt, securing their cooperation in the heinous scheme. Using their malign influence, the collaborators operate in the shadows, gathering money and positions of power to usher in the end of days. With their plans nearing fruition, the forces of Hell are on the verge of being unleashed upon our world. Only one man stands in the way of Armageddon; he just doesn’t know it yet.
Malachi has been plagued with horrific nightmares since adolescence. With every step humanity takes towards the precipice of eternal damnation, they worsen. Observing atrocities carried out by abominable creatures not of this world, he fears for his failing sanity. With madness beckoning, a chance encounter sets in motion a series of events that will begin to unravel the mysteries of his dreadful visions. Unbeknownst to Malachi the forces of darkness are hunting for him, eager to seize the untapped powers he possesses. With the fate of mankind hanging in the balance, unlikely alliances are forged in a desperate attempt to keep him from their evil clutches.
Facing off against the all-powerful organization and their infernal overlords, can Malachi rise to become our last hope of salvation?
MY REVIEW
This is book is a departure from Ricky's zombie books . In this book he takes us on a ride that is so terrifying . Let me introduce you to Malachi , he has been plagued with terrifying dreams all of his life . He is a very special man that can save the world from the evil older then time . He just doesn't know it yet .  Will he be able to survive the forces that wanting to bring on Armageddon
The characters in the story are so very complex . Malachi is the shy quiet type that is harbouring a dark secret. He has basically closed himself off from the world . The terrifying dreams he has had . has kept him from ever finding love . He is the character you want to wrap up and bubble wrap and keep safe. He is such a sweet caring guy and trust me you will fall for him He becomes a stronger character as you read the book . You feel his pain and you celebrate when he is happy .
Chloe is the woman that he finally falls in love with, he is her hero after saving her from three a holes . She helps him fight the people wanting him to use him . There are so many characters in this book the good guys and the evil and I mean really evil ones. They are all apart of what makes Malachi and Chloe who they are .
I really enjoyed reading this book , it is such a departure from his other books . Ricky takes us on a emotional rollercoaster of a ride with this book .  It moves at a steady pace and has some twists that you will not see coming .  I must say though the beginning of the book had me a bit confused but after I got through the first chapter everything became much more clearer and the story just flowed from there . So if you want a great book that will scare you and make you think at the same time . Check our Infernal , Emergance
Posted by BOOKS TO CURL UP WITH at 1:15 PM